When updating the hop oils calculator for 2014, I learned a lot about hops while I pestered staff at YCH HOPS for data and quizzed them on how they test their hops and put together their blends. Thankfully, they were super cool and answered all my questions and offered some interesting insights into the entire process. Here is an attempt to explain just a little of what I found interesting.

Pellets are Blends of Multiple Lots. Most homebrewers already know that hop pellets are typically blends of a few lots that are selected to balance out variability. This is because different factors like growers, growing regions, age of hops, and harvest date can have an impact on the final hop oil figures and ultimately the aroma and taste. The way it was explained to me is that pellet blends are carefully created to achieve a “standard” mix that’s representative of the variety. This is why when we buy a bag of Citra hops we can be pretty confident that the result won’t be a surprise to us (assuming the brewing process is smooth).

There isn’t a single blend for each variety of pellets however. It’s important to know that not all lots are included in the pellet blends, either because they are outliers or because they’ve been selected by a brewery on contract. It’s hard to get a homogeneous mix if there are a lot of inputs (lots of different lots) and it’s important to maintain traceability from the field to the brewery.  Imagine if you had to do a recall because of a problem with a specific lot and it was blended into a huge amount of pellets!

Hop Lot Outliers. How different can hops of the same variety even be from lot-to-lot? Using the chart below (also provided by YCH HOPS), which shows all the tested data from all the different hop yards in 2013 and 2014 separately for a popular public variety hop (I don’t have permission to name the hop), we can see big differences. The mid-line where the colors change is the median, the edge of the color is the upper/lower quartile. The lines extending vertically from the boxes (the whiskers) indicate the variability between multiple growers. Looking at Myrcene as an example, we can see the lowest point in 2014 shows a tested myrcene level of around 40% from one grower and at the other end of the spectrum we can see from another grower a myrcene level over 70%! Looking at the average Myrcene levels across all of the hops, this particular popular hop tested around 57%, making these two hop crops extreme outliers to the average. 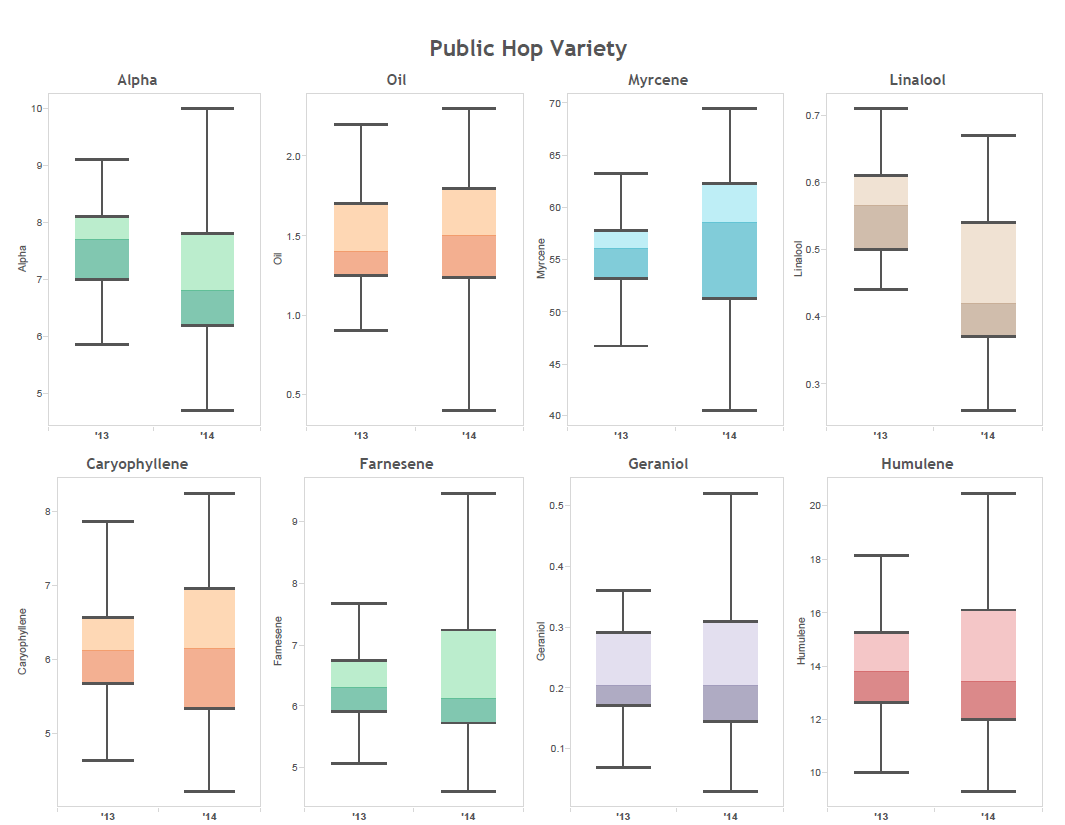 The pellet blends we are buying today don’t usually include the hop lots with these extreme outliers, I’m assuming because it would be too difficult to get the blended standard the hop suppliers are trying to achieve. These outlier lots of hops don’t go to waste; they can be used for a generic bittering extract. Another great use is for just to brew beer with them to achieve unique and different flavors and aromas that you couldn’t achieve with the standard blend. As an example of how the different lots can alter the flavors, going back to the chart above, we can see the average Geraniol content for the blend in 2014 is less than 0.1%, however the chart shows that some growers had lots with Geraniol coming in slightly over 0.5% (this is like a Fuggle to Mosaic swing in geraniol). Geraniol is said to have a floral, sweet, rose characteristics, so you could see how such big fluctuation in this particular oil could have aroma/taste affects to beer. Hops, just like grapes from the wine industry, can vary quite a bit within a variety! As much as I appreciate the stable flavors I get from blends of single hop varieties, I would love to be able to buy hops directly from the growers and experiment with the same hop varieties from different lots. Just like we have famous breweries, we could start to see famous hop yards! I should note that these differences in single varieties across hop yards isn’t as much of an issue with the newer fields and “trademark” varieties, but it can be more prevalent in older yards, like a 15 year old Cascade yard.

Not all pelleted hops are blends however. For example, if a purchaser (brewery) has a big enough order, they have the luxury of being able to receive non-blended pellets if they really enjoy the characters of a particular grower’s variety over the blend. These customer selected lots means that a brewery has purchased bales from a single lot and has met the minimum volume required for pelleting. Sometimes these unblended pellets find their way into the general market, like if a brewery finds that they are over-contracted and chooses to release some of their inventory. These hops are no better or worse than the blended lots (they’re not the outliers), but they may have some subtly unique characters that caught the attention of a commercial brewer. Homebrewers need to figure out how to get their hands on these!

What about Whole Cone Hops? Whole cone hopes are unblended. The primary reason is stylistic – whole hops offer a direct link back to the farm. Many of the people who brew with whole hops do it for the aesthetic of using a “pure” unadulterated product. There are also practical reasons not to blend whole hops. Oxygen is the enemy, and breaking up bales in order to mix them would not only expose the cones to more oxygen, but it would damage the cones themselves, which accelerates deterioration.

Whole cone hops essentially represent the terroir of the hop farm that produced them and the choice between whole hop and pellet is one of local character vs. consistency. However, most of the hops that are sold in whole cone form are from pretty middle-of-the-road lots (meaning low variability), so it’s rare to find anything too unexpected when brewing with them. It would be nice if the bigger hop suppliers put the lot information on the whole cone packages so we had an idea where the hops are coming from.

How are the Hops Tested? The American Society of Brewing Chemists has an approved standard for quantifying hop oils, which involves performing a 4 hour boil of the hops in a distillation apparatus to collect the oils (who boils their wort for 4 hours!). One reason for the long boil is to be sure that all of the oil has been extracted from the hops. The distillation is primarily used to determine the oil content of the hops (mls oil / 100g hops), so it’s important to be sure that all of the oil has been collected. The compounds that boil off aren’t actually lost though because the vapor is condensed and collected. The whole idea is to boil off all the oils, so that they can be separated from the plant material. The reason the hops are tested by this standard as opposed to a process that more closely resembles the brewing process is because the results are then comparable with all other labs. The major problem is that some of the compounds are not heat tolerant, so they degrade when exposed to boiling temps for that long. There are alternatives to steam distillation, but they involve some pretty nasty chemical extractions which are also not very analogous to the brewing process. In an ideal world, hop oils would be tested after being extracted into wort, but then you run into other variables like how do you choose the wort gravity and pH, and whether the hops are added early in the boil, late, at knockout, or in the fermenter? It seems to me there is room for experimenting with testing that will be closer to what brewers are familiar with.

Differences in Hop Blends from Year-to-Year. To confuse things a little more, each hop crop year has the potential to change a varieties blend standard that I mentioned above. Maybe it was different growing practices or weather that altered the averages from year-to-year. To look at how different the hop blends were from 2013-2014, I charted out the differences from the two years. Each varieties oil content shown is the amount changed from the 2014 crop to the 2013 crop. As you can see, there is very little change in hop blends from year-to-year, which is pretty amazing. The last column in the chart is the variance between all of the oils for each variety to see what hop had the greatest fluctuation in crop years. Ironically, Glacier had the largest variance, with the biggest jumps coming from a reduction of 15% in Myrcene and a 10% addition in Humulene. The most stable hop was Palisade, which showed virtually no change from the two hop crop years.

These annual variances in hop blends also closely aligned to the abundance of the particular hop. Popular varieties are grown in greater numbers to keep up with demand, so there are more choices available when blending, and the larger sample size tends to converge around the true mean. The opposite is true if there are only a handful of lots grown for a particular variety. One pest outbreak or one thunderstorm can affect the mean for the entire variety.

Please confirm deletion. There is no undo!