Updated: 12/10/15
You might also find my Hop Oils Calculator helpful.

How the calculator works

There is no shortage of hop substitution recommendation charts online, so why create another one? I wanted to take a more statistical approach to looking at hop substitutions, so I gathered all of the data I have for the 2014 hop crop sent to me by YCH HOPS and looked only at the aromatic inducing oil compounds for each hop (B-Pinene, Linalool, Myrcene, Caryophyllene, Farnesene, Humulene, Geraniol, Other). I then ran a correlation for each hops combined oil compounds against every single hop in the database, which gave me an individual numerical relationship between all of the hops.

When you select a hop in the calculator, it computes the top five closest hop varieties to your selection based on the correlation coefficient for each hop compared to your selection.  The higher the number is to 1, the closer the relationship to your chosen hop (in hop oils).

I’ve also included the suggested hop substitutions from Hopunion as both a resource and for comparison purposes to evaluate the calculated substitutions. Some come as surprises and others match up to the standard substitutions we have all heard before.

Of course, this is not a perfect method for determining substitutions (I’m not sure there is one), but I think this type of calculation does get you in the ballpark for similar but not identical flavors and also provides a starting point when trying to blend certain hops to achieve desired flavors.

Using the calculator for hop blends

Another possible use for the calculator is to look at potential new hop blends. For example, can we use highly correlated hops (those with very similar oil compositions) to create interesting and reliable blends? I recently experimented with one of the calculators results that caught my eye, which was the strong relationship between Bravo and Mosaic (not something I would have guessed). The blend seemed to work, by combining similar hops in terms of oil composition you can get a more complex aroma/flavor than a single hopped beer without worrying about combining extremely conflicting flavors…well, that is the thought anyways, more experimentation is needed!

Why is the calculator missing hops?

I only used the hops that were tested at Hopunion for the 2014 harvest that they were willing to share with me. Hopefully in early 2016, I can work with Hopunion again to update the list with the 2015 harvest!

You can alternatively use the image below of a principal component analysis of all of the hops which visualizes the relationship of each hop to it’s closest relative according to their individual hop oil compositions.
(click for full size) 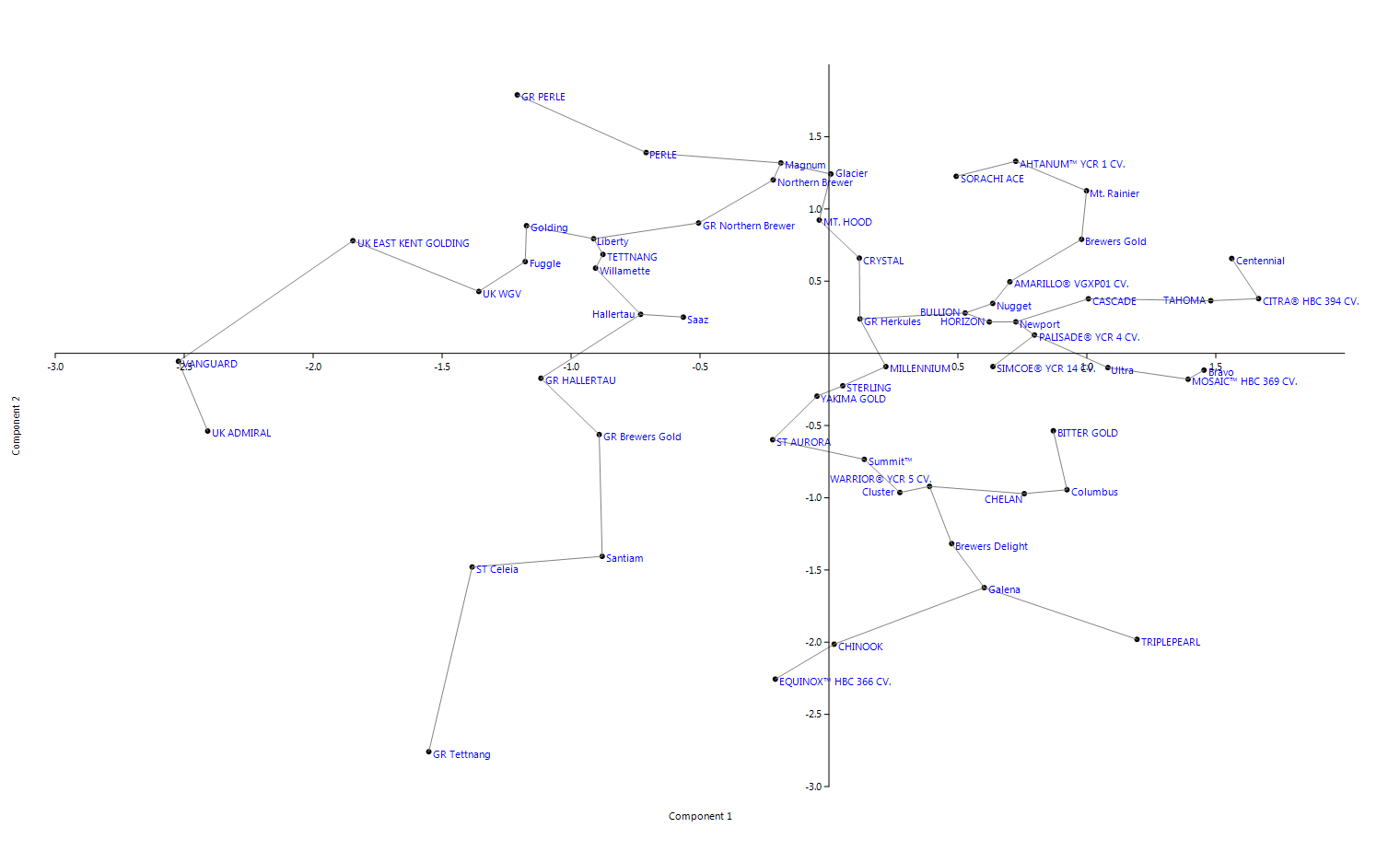