2015 National Homebrew Competition By the Numbers

Earlier this year I attempted to estimate the statistical odds of advancing an entry to the 2015 NHC final round, but now that the final round is complete and the numbers are released, below are the actual odds of advancement by judging location. The hardest style to advance a beer in this year was not surprisingly IPAs, which had a total of 667 entries across all locations. The easiest category to advance was traditional meads, which only had 83 total entries (which are about how many IPAs San Diego had alone). If you were lucky enough to advance an IPA in San Diego, you had the toughest road with only a 4% chance. In Austin, TX this year there was only one entry for the standard cider and perry category, but they couldn’t quite get a score of 30 required to advance to the next round, making it the easiest location/category, since nobody went through.

Below is a look at how the submissions are trending from year-to-year. Mead’s and ciders are trending up, but not aggressively. I would have thought sours would have gone up, but they remain fairly neutral. IPAs are down from the past year, but still had more entrants this year than any runner up category to IPAs last year.

Trend of Submissions by Category Since 2013 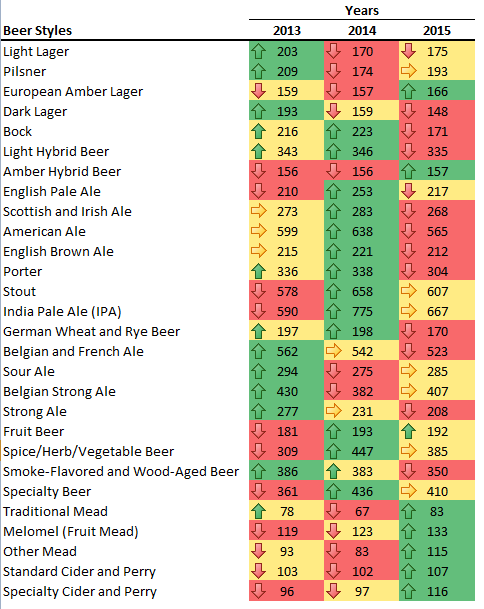