The acceptance emails for the 2015 American Homebrewers Competition (NHC) have been sent and it appears that everyone who wanted to compete is in with a cap of 4 entries per person. Assuming the total number of beers judged will be about the same or more than last year, there will again be 300+ more beers judged than in just 2009! There has been a pretty solid uptick in entries the past 7 years according to the data available on the AHA website (last chart in the post).

To calculate the statistical odds for advancing to the final round as well as winning the whole thing for a particular category, I used the 2014 data from the AHA. Of course, the numbers could swing a bit from each judging center as to the number of beers entered into each style, but this gives us a pretty good guess for 2015. Below is a chart of the estimated statistical odds of advancing to the final round in each judging center as well as the total odds of placing top 3 nationally and then winning the whole damn thing! The chart is shaded from light to dark blue, the darker the blue the better the odds.

The Top 3 and Win percentages are theoretical based on the total amount of beers entered into each category across all judging centers, if you advance  to the finals you would have a 8.3% chance of placing top 3 and 2.7% chance of winning the final round (12 judging centers x 3 beers from each).

The AHA’s website has data for the total number of entrants in each category for 2013 and 2014 only. Below is a chart that illustrates the difference in submission from the two years (only showing the category with noticeable swings from the previous year). As you can see, the categories trending down from the previous year are light lagers, pilsners, dark lagers, Belgian strong ales, and strong ales. The categories that are trending up are IPAs, spice/herb/vegetable beers, and specialty beers.

The biggest takeaways from the data are clearly that mead entrants have the easiest route to the finals, especially on the west coast. There were 6 judging centers last year where 100% of the meads entered advanced! Apparently, the San Diego area doesn’t like pilsners and New York doesn’t like European Amber lagers, both had a 60% chance or higher of advancing to the final round. The absolute hardest category to win is Indian Pale Ale (IPAs), where there is an average estimated chance of only 3.8% of advancing to the finals. This stat is what makes Kelsey McNair’s accomplishment so unbelievable by winning Gold in 2010, 2012, and 2014 for his Hop-Fu! IPA! McNair’s recipe makes up a good chunk of the statically driven recipe I put together based on an analysis of the past decade of NHC IPA winners.

Just because I like charts, here’s one more showing the rise in popularity of NHC over the past 7 years. 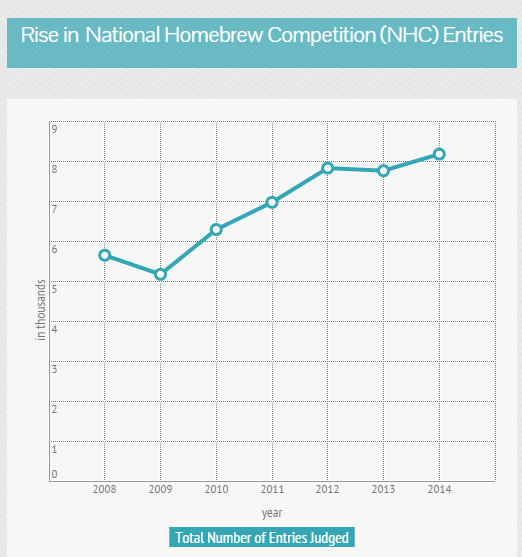