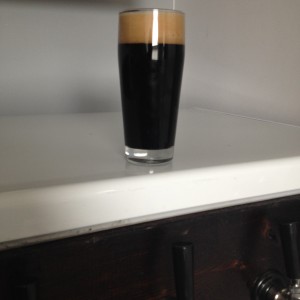 Today is Super Bowl Sunday, over 2 months since I brewed this porter, and I still have half of a keg. My wife asked me if this beer was any good and I had to honestly reply, “I don’t know.” I brew almost exclusively hoppy pale beers, aged sours, and hoppy tart saisons. In fact, this is the first time I’ve attempted to brew a porter and only the 2nd time I have even brewed a beer over 40 SRM (and the other attempt was a heavily hopped black ipa). I’ve never incorporated vanilla beans into a beer and I’ve never brewed with cocoa. Basically, I have no clue what I’m doing with this beer and worse yet, I don’t have the palate to say if it’s any good.

I don’t pay particular close attention to style guidelines, so calling this a porter is probably incorrect as the SRM is a little high, but it’s not a stout either due to my refusal to include any roasted malts. I wanted to see how much chocolate character I could get with little to no roasted flavor. To do this, I decided to go with all midnight wheat for the coloring with equal amounts of a mid level crystal malt for some background caramel flavor. Two days prior to kegging I dropped 2 split  and chopped organic vanilla beans into primary. I bloomed 1.5 ounces of organic cocoa powder with a little bit of hot water and added the mix directly to the serving keg prior to racking.

Adding the bloomed cocoa directly to the keg before racking in beer.

Although the beer pours with a nice head, it disappears to a thin layer relatively quickly, maybe because I added the cocoa directly to the keg? Lots of vanilla and chocolate in the nose with a hint of fruitiness. Nice soft mouthfeel, which I think is largely due to the London Ale III and the addition of only calcium chloride for the mineral additions. The taste is similar to the aroma, mostly chocolate with just a hint of roast. The vanilla is there, but not in a big way. The aftertaste leaves a dry chalky cocoa taste in your mouth. Absolutely love how smooth the mouthfeel is, but that doesn’t make up for the lack of malt complexity you would expect in a beer like this. Overall, it’s a decent beer, but I expect my preference for hops means I have another couple months with this occupying valuable tap space!