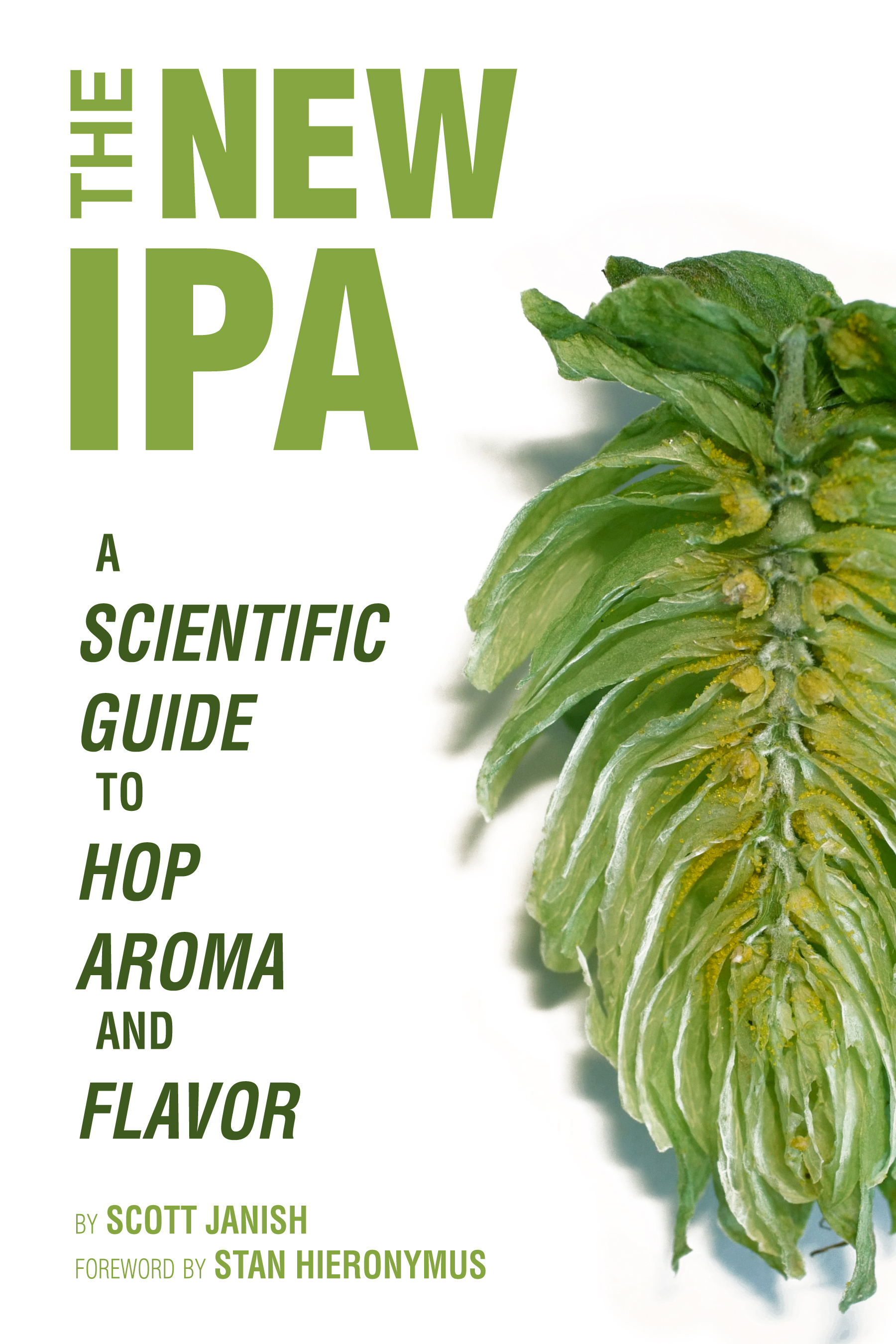 During the summer of 2016, I decided I was going to do it. I was going to write a book. I didn’t realize at the time it would take me over two years. I didn’t know I would have to read nearly 1,000 papers on brewing. I didn’t realize the project might inspire me to quit a desk job, open a brewery, and lose health insurance. I didn’t know I’d travel the country making new friends by interviewing brewers whom I respected the most. I have to say, this has been a lot of hard work, it’s been incredibly educational, and I’d do it all over again!

In late January 2016, a snowstorm shut down the Federal Government and I found myself stuck at home fascinated with a study I came across on extraction during dry hopping. Previously, I had spent more time than I care to admit reading through homebrew forums and blogs trying to find answers to processes-related brewing questions that intrigued me. With that first study that caught my attention authored by Peter Wolf, I finally had a source that wasn’t online anecdotal experiences and opinions, but actual tested data with sensory results. I was hooked and spent the remainder of that snow day scouring the internet for similar hop studies, eventually writing my first scientific blog post summarizing what I learned titled, “Examination of Studies: Hopping Methods and Concepts for Achieving Maximum Hop Aroma and Flavor.” From that day forward, I created alerts for brewing studies, signed up for the various academic organizations that publish journals and stashed every brewing study I collected into a searchable cloud database, which would become the ultimate source for this book.

The snow day was a blessing in that I found my niche as a blogger, which to me, was somebody willing to spend countless hours digging through research (not always knowing what I was looking for) and testing out the findings that excited me the most with 5-gallon experimental batches on my stove. This book is the organic extension of that passion to learn and put into practice the great work of brewing researchers around the world. Over the span of two years, I spent my free time reading over 1,000 academic studies (citing over 300 of them in the pages ahead) focusing the direction of the research on information that could help explain the mystery of hop aroma and flavor.

This isn’t a book promising the absolute best methods to brew world class hazy IPAs (it should help with that, however). Rather, it’s a book exploring the science of the various factors that contribute to brewing intensely aromatic and flavorful hoppy beers, with the hope of getting brewers to think differently about how to approach the style. My goal for the book is to inspire brewers to use the research to experiment and disrupt ingrained brewing habits and commonly held beliefs. I often think I’m onto something when my brewing friends and colleagues think my next planned experiment is crazy. It’s this outside the box thinking, driven by scientific data, that can produce amazing (and horrible) results.

Brewing amazing beer isn’t always the goal of experimentation. For example, research related to dry hopping and bitterness inspired me to brew a hazy IPA with zero hot-side hopping, choosing to only dry hop the beer at high levels. The resulting beer wasn’t very good, it was extremely bitter in a polyphenol-vegetal way and was void of any fruity hop saturated flavor. Despite the taste, I considered the experiment a success. It taught me that hot-side hopping was a valuable part of making a great IPA and the research portion of the experiment (authored by John Paul Maye Ph.D.) gave me a new understanding of how dry hops contribute to bitterness and flavor.

The decision to self-publish this book was one I approached cautiously. A publisher would help polish the contents with a professional staff dedicated to the craft. Their reach in promoting the book would be another obvious upside. The downside of self-publishing is that all the work is on me, somebody with zero experience in book production. So, should I go with a publisher or self-publish? Luckily for me, none of the major publishers seemed that interested in a book focused solely on hop science, so the decision to go at it alone became an easy one!

I’m excited about the benefits of self-publishing, however. The ability to focus on the topics that I’m most interested in is extremely rewarding. Working on this project on my own timeline was also a huge bonus as starting up a brewery at the same time really slowed its progress. I’m also excited to have the rights to the content so I can use it on my blog or in other publications as I wish. Another big bonus to self-publishing is the ability to put out updates to the book as often as I wish (including small updates to address inevitable typos and formatting issues). As the science evolves and I continue to talk with other brewers, there should be plenty of future findings to write about!

I start the book out in Chapter one exploring the history of hop research and build a foundation of basic hop compound knowledge to use as a guide throughout the book. I also look closely at the differences between hop pellets, cones, and various extract products.

Chapter two is all about hot-side hopping, which includes science on early addition bittering hops and late whirlpool hops. I look at research into the importance of whirlpool hopping for enhanced hop flavoring. How the temperatures and durations of whirlpool hopping can impact hop compounds. Also, how certain hop varieties can have higher extraction efficiency than others.

Chapter three takes a close look at the importance of proper hop storage and how aging hops can impact their compounds and ultimately the flavor of the beer. Surprisingly, some of the research may inspire experiments using slightly aged hops on the hot-side!

Chapter four focuses on one of the most important characteristics of a great hazy IPA, a soft and approachable mouthfeel. Water chemistry (sulfate-chloride ratios), additions of minerals from malts, how minerals can impact hop flavors, and personal experiments help to appreciate the keys to great mouthfeel.

Chapter five examines how grist selection can impact flavor perceptions in hoppy beers. In particular, how the concentrations of proteins, carbohydrates, and viscosity can alter flavor and aroma perceptions. Even certain base malts may contribute more fruity flavors than others! Yeast pitching rates is also looked at as another factor in the retention or elimination of volatile hop compounds.

In Chapter six, I break down esters and fusel alcohol production during fermentation, both of which can play large roles in the final taste and aroma of beer. A little bit of fruity ester production with the right yeast strain can play a positive role in making a hoppy beer more complex and aromatic, while too much can compete and potentially dominate the hop flavors you might be seeking. This Chapter looks closely at what brewing variables may increase or decrease esters and alcohol production so brewers can make changes to their processes to get closer to their desired goals.

Chapter seven covers one of my favorite aspects of brewing hazy hoppy beers, dry hopping! I look at research on the importance of keeping oxygen out during dry hopping, how different dry hopping durations and amounts can impact hop compound extraction, and the some of the potential negative aspects of dry hopping (like too much polyphenol extraction).

In Chapter eight, I continue looking at dry hopping research focusing on how processes can impact the bitterness of beer. It’s commonly believed that the only way to get hop bitterness into beer is with hot-side additions, but recent research sheds light on the importance of different hop bittering acids and their extraction during dry hopping. In addition to bitterness, this Chapter looks at the impact dry hopping can have on the final pH of beer, which can impact perceived bitterness.

Chapter nine explores research surrounding dry hopping and enzymatic activity which can lead to refermentation. Often referred to as hop creep, the enzymatic activity from dry hops can be put in check with various processes maneuvers like controlling dry hop temperatures and contact time.

Chapter ten gets into another one of my favorite topics, biotransformation of hop compounds. The term biotransformation is often thrown around as a key to hazy hoppy beers but is largely misunderstood and mystic. This Chapter gathers together the relevant papers on the subject to give brewers a better understanding of what biotransformation is as well as factors that favor its production.

In Chapter eleven, I stay with the topic of biotransformation focusing on hop thiols, which despite having low concentrations in hops, have the potential to enhance hop flavor. This Chapter also explores research from the wine industry on important thiols contributing to fruity flavors in wine (many of which are found in hops) and methods used to increase their presence in beer via biotransformation. I also share my experience using wine strains in hoppy beers inspired by the research.

Chapter twelve looks at a new and popular product called lupulin powder, developed by Yakima Chief, Hopunion Cryo Hops® (as they are called) are advertised as the concentrated lupulin of whole leaf hops which contain aromatic hop oils but less of the vegetative material of traditional hop pellets. I talk to commercial brewers about their experience with lupulin powder and look at tested data on IBU and polyphenol contributions from cryo hops.

Chapter thirteen looks closely at the science of why hazy IPAs are in fact hazy. Various factors have been studied like mid-fermentation dry hopping, pH and ABV levels, grist and hop selections, all of which can help brewers obtain different haze levels.

Chapter fourteen examines the fragile nature of hazy IPAs by exploring some of the research surrounding beer oxidation and ways to increase shelf-life. Grist selection, dry hop varieties, and early hot-side hopping can all impact the stability of hazy beers.

Chapter fifteen was one of my favorite chapters to write. I was lucky enough to travel around the country interviewing brewers I respect the most (not only for their established haze credentials, but for being open to sharing their secrets and lessons learned over the years). There is no question that the early success of brewing hazy hoppy beers at Sapwood Cellars is a direct result of these honest brewing conversations. In this Chapter, you will learn from the best, including Other Half Brewing, Prison City Pub and Brewery, Reuben’s Brews, Breakside Brewery, Bissel Brothers, and Great Notion!

The New IPA can be purchased here.