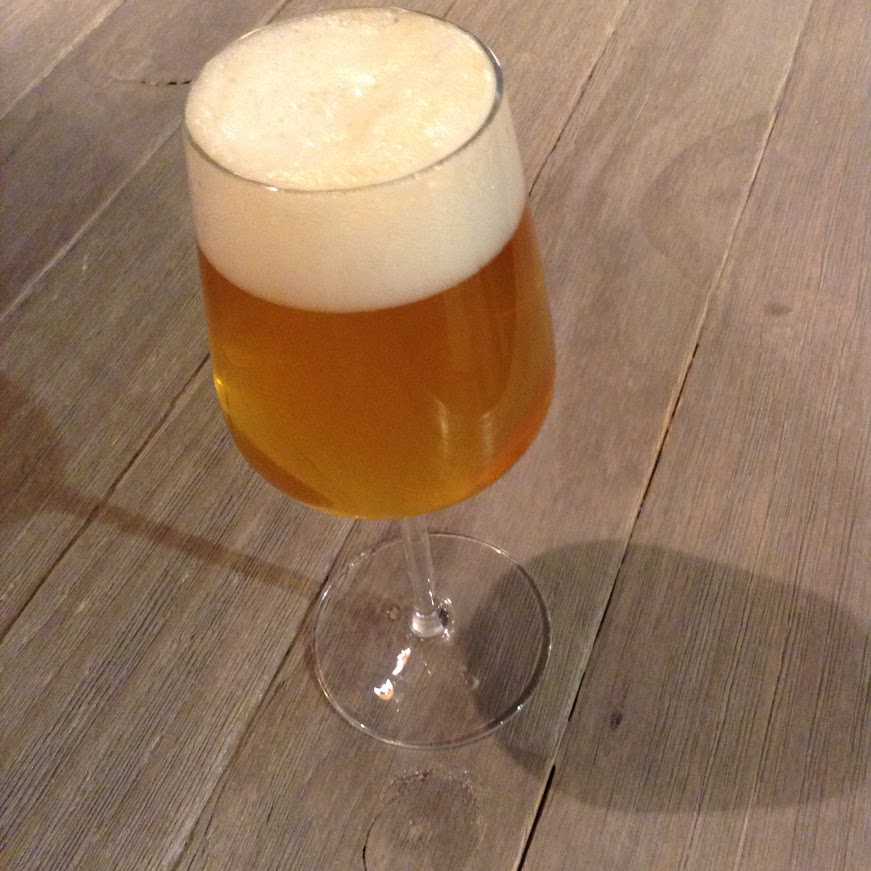 What I love about sour beer brewing is how it forces me to completely change my approach and expectations. Unlike brewing hoppy beers, where the end goal remains relatively constant and every process step is calculated and researched, sour beers evolve at their own pace without concrete expectations. Your palate and imagination are just as important to helping a beer reach it’s peak than any small brewing variable, if not more so. Of course, like with most skills, practice and patience are important and you don’t always get it right. There is certainly a larger window in sour brewing for high risk/reward moves like incorporating fruits, vegetables, hops, and even spices, but how much to add, when to add it, knowing what a beer needs or appreciating the direction a beer is going is the challenge (and the fun!).

This was one of those beers for me where I struggled to decide on the direction to take, after about a year of aging, it didn’t do much of anything. I didn’t get any acidity, there weren’t any bold flavors to work from and just subtle aroma descriptors to play with (mainly pear). When you’ve sat on a beer this long and certain it’s become what it’s become, you have to make that decision, bottle plain or try to nudge it in a certain direction (or save it for future blends).

As with most sour beers (or attempted sour beers), the dominate flavors are coming from the microbes, which in this beer was The Yeast Bay’s Melange sour blend with the addition of bottle dregs I had previously built up and harvested. Melange is a blend of “two Saccharomyces cerevisiae isolates, Saccharomyces fermentati, five Brettanomyces isolates, Lactobacillus brevis, Lactobacillus delbreuckii and Pediococcus damnosus.” To encourage acidity, Yeast Bay suggests keeping the IBUs low (0-5 IBUs) or for more funk having IBUs between 5-10). I calculated 15 IBUs for this beer, which could be partly responsible for the lack of acidity I achieved. But with the addition of dregs, I’m surprised the diverse set of microbes was so lackluster. Having had a beer aged with this same blend prior, I suspect some of the dregs I pitched were also part of the problem (I’ve since disposed of these, why keep them around if you don’t like the results?).

After two months of aging, the beer had a yeasty Saison type of taste that leaned a little banana and clove, but no signs of acidity with a pH of 4.15. I left the beer alone for another 7 months, giving it enough time to do whatever it was it was going to do. Tasting the beer again around 9 months in, the aroma had a noticeable apple and pear thing going on, with very subtle funk. The flavor, on the other hand, was relatively flat, bland, thin, and grainy (and still a pH above 4.0).

In an attempt to get the flavor to match the apple and pear-like aroma and at the same time boosting the mouthfeel of the beer, I decided to add an entire bottle of Clos du Bois Chardonnay at kegging. The wine itself has aromatic descriptors of apple blossom, ripe pear, and sweet lemon drop. There’s also a nice creamy mouthfeel to the wine that I hoped would carry over into the beer. Attempting to take the aroma one step further, I also added an ounce of Jarrylo hops to the keg, which I was hoping would also play into this evolving pear theme.

Although I don’t put too much thought into the grist of pale beers I’m going to age with bugs, I was influenced by a few studies I was reading at the time regarding wheat flour. In comparison to identical beers made with all-malt grist, one particular study found that wheat flour beers had increased shelf-life, which they theorized had to do with low amounts of both nitrogenous and polyphenolic materials from the flour. However, the study didn’t indicate how they came up with the shelf life figure. The wheat flour beers also had greater head retention, with the best head retention in beer with 25% wheat flour (improvement of 20 seconds from an all malt beer). Fermentations were slower in the wheat flour beers, which may have been due to the reduction in nitrogenous nutrients that you get with an all malt wort, although this could be supplemented via yeast nutrients I would think. Fermentability was the same as the all malt wort in the 25% wheat beer but decreased when increased to 50% wheat flour by approximately 10%. 1

Increased foam stability by using wheat flour was also found in another study released a few years after the above-mentioned results (a problem I continually have in acidic beers) Here, the increase in foam was said to be associated with more and larger proteins resulting from replacing a percentage of a malt grist with wheat flour. The authors found that malt solubilizes some of the wheat flour protein during mashing without subjecting it to significant proteolysis (breakdown of proteins into smaller polypeptides or amino acids).2

I should have upped the percentage of flour to see if I could replicate any of the positive results from the studies, but for this batch I went with 8% wheat flour along with 4% spelt flour (similar to wheat). If you decide to experiment with flour, take the steps necessary to prevent stuck sparges! If the wheat flour might aid in head retention and possibly enhance the shelf life, it seems logical to experiment with it in beers intended to be aged. Also included in the grist was a bag of Kamut flakes, which have a sweet and buttery flavor compared to something like oats. However, at such a small addition and with the expectation of the bacteria representing the bulk of flavors, I didn’t expect to get much from the Kamut.

I let the beer, wine, and hops carbonate naturally in a keg with the addition of some boiled cane sugar and fresh QA23 wine yeast. QA23 is typically used as a Sauvignon Blanc strain with the potential to create passion fruit characteristics and has an ability to produce high glycerol production (mouthfeel booster).

Paying closer attention to the bottle conditioning yeast selected is something I’ve been thinking more about. A study in 2011, with the help of Brooklyn Brewery, examined the role of yeast choice used for refermentation (bottle conditioning) in a 9% Belgian dark ale (Local 2). Five different dry yeast strains were used for carbonating along with a dextrose solution. Despite pre-fermented beer being low in amino acids, changes were found across the strains in the final carbonated beer’s final esters and alcohols. Ethyl acetate (fruity/solvent) ester was reduced in all of the strains and one strain had slightly higher levels of isoamyl acetate (pear/banana). In addition, levels of glycerol increased above the original levels after bottle conditioning with all the strains, but at slightly different amounts.3

The study ultimately concluded that yeast strains do behave differently during bottling conditioning and can contribute the final characteristics of the beer. Going beyond the tested results, a tasting panel also found differences in the final beers. Two strains had a “positive” influence on the beers, one increased the complexity, and one actually seemed to strip flavors. Maybe we should be giving this step more consideration!

The resulting blend of aged beer, wine, and hops is an interesting one! Definitely an improvement to the base beer, but still not where I’d like it to be. The wine boosted the mouthfeel and added a strong spice character that I wasn’t anticipating. The increased alcohol from the wine also gave the beer a hot edge. It’s difficult to tell what, if anything, the Jarrylo hops are adding, but pear and apple are still the strongest descriptors, but the funk and spice come together to form an apple pie, brown sugar type of thing–a big change from the original base beer! 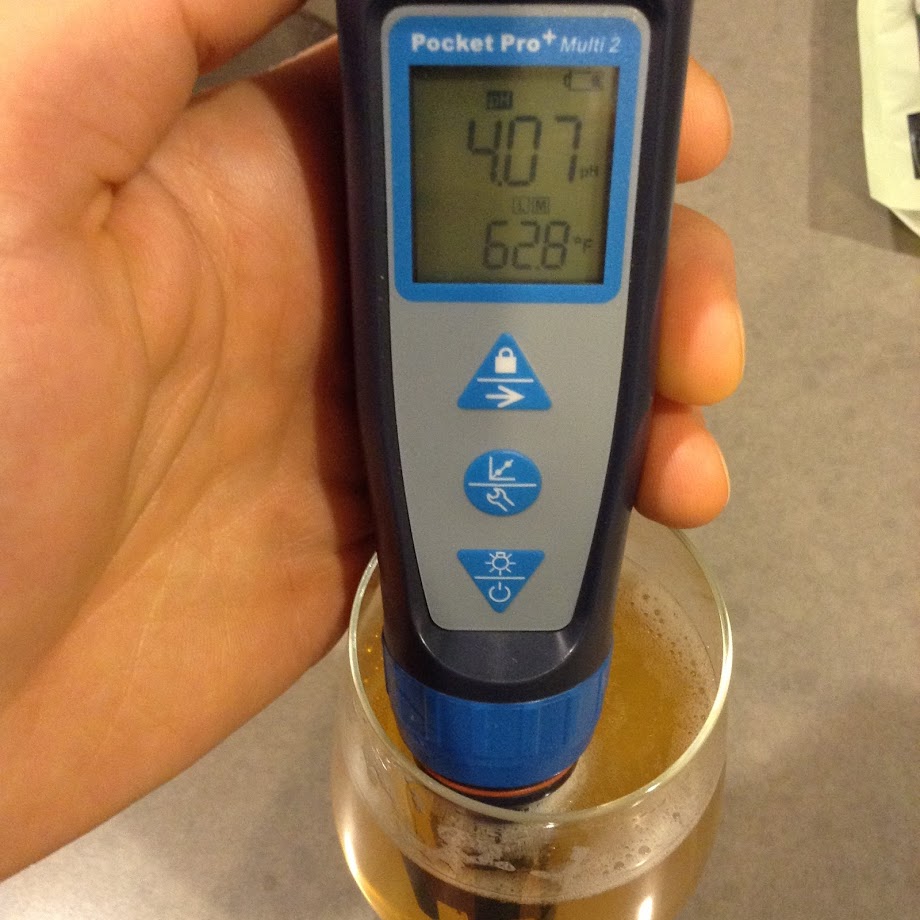 Overall it’s an interesting beer, but with the lack of acidity it comes up a little short. For whatever reason, this blend of bugs just didn’t do much (finishing at a pH of 4.07). In this case, I probably should have considered a fruit addition of some kind to add a kick of flavor and some natural acids and skipped the dry hops. Fruits will add malic and citric acids, which can give a sharper impression of acidity than lactic acid.4Dry hopping will increase the pH, which is the opposite of what this beer needed (although at just an ounce of Jarrylo, this pH adjustment was minimal). My friend Mike recently talked about this very subject on a podcast, suggesting fruit to be considered when the pH is higher than you want and hops when you want more interesting aromas/flavors in a beer that is already sour enough or slightly too acidic. You would have to dry hop fairly heavily to achieve a noticeably pH increase, one study suggests that if you dry hop with 142 grams (about 5 ounces) you might see an increase in pH of 0.28. 5 Keep in mind this was in a clean beer with an assumed pH in the 4’s, if your beer pH is in the low 3’s, it should take more hops to raise the pH by that much by an order of magnitude because each decrease in pH of 1.0 is 10 times greater acidity. Also worth keeping in mind that as the pH increases, you might also experience a slight increase in perceived bitterness.6.