When you get rid of labels, amazing things can happen. 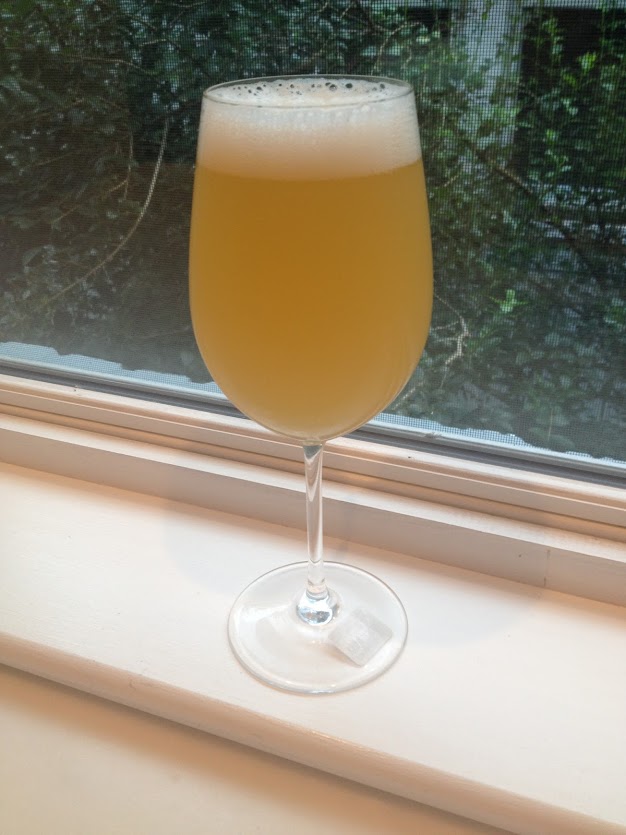 The quote above is one I heard listening to a podcast a few months back and it stuck with me. Not only does it seem like a good quote for life in general, but I couldn’t help but to apply it to beer. I understand the desire and even the need for beer styles, but I don’t pay particularly close attention to them. Part of what makes brewing at home so fun and intriguing is applying methods and ideas across various styles into an experimental beer!

I was inspired for this mashup beer by listening to a Basic Brewing Radio episode with Kelly Ryan, brewer at Fork and Brewer in Wellington, New Zealand on a 20 mile bike ride home from work (I don’t do this often). Although I was intrigued by many of the brewing nuggets Ryan talked about, one thing in particular peaked my interest and that was his theory (as he put it) that yeast strain selection is one of the biggest factors for improving hoppy beers. Ryan went on to say that after trying all kinds of strains, it wasn’t until he used the California Common strain in his “ales” did the hops really shine. I tend to agree with this theory, based on the improvement I’ve seen in both hop aroma and flavor in my own beers when using the NEIPA strains (RVA Manchester Ale strain my current favorite). The idea goes (although I have yet to see any hard science behind these strains) is that these English strains allow for more yeast and hop oil interaction (bioflavoring) bringing the bright fruity hop flavors to the forefront. There does appear to be minimal bioflavoring from most strains with hops already studied with yeasts ability to transform terpenoids during fermentation (conversion of geraniol to citronellol for example). But for even further bioflavoring from glycoside-related volatile compounds from fruit and hops, beta-glucosidase activity is needed, which most saccharomyces strains are not producers of (likely including these NEIPA strains).

There is another potential reason why some of these saccharomyces strains could be working so well with hops and that is saccharomyces ability in certain strains to produce what’s called exo-beta-glucanase activity, which is also capable of liberating aroma compounds directly from glycosylated precursors. Strain by strain studies of exo-beta-glucanase activity is not something that exists (to my knowledge) and this wasn’t intended to be a post looking at beer studies, but I’m wondering if these NIEPA strains (and maybe the California Common strain) aren’t possibly producing this enzyme, which like Ryan said, is allowing the hops to shine! This is definitely an area of hop study I’d like to explore further.

Curious about this hybrid lager strains ability to aid in hop aroma and flavor, I chose to give it a try in a low ABV session oat summer IPA. I wanted to keep the brewing process similar to how I do NEIPA, which is relatively low IBU’s, a big late hop addition and early and multiple dry hops–slapping the beer with hops at every stage! Not sure if the strain could produce that soft and delicate mouthfeel you can get with NEIPA strains, I went fairly heavy with oats, which has its own benefits, and 100% chloride for enhanced mouthfeel.

Because fermentation can have such a big (negative) impact on hop oil retention, I’ve always been curious if it really matters what hops are used during the whirlpool/steep process, especially if a beer is going to be heavily dry hopped potentially masking any perceived flavors that might have survived from the whirlpool/steep anyways. It seems like it might make sense to experiment with hops heavy it total oils for this process in hopes more stick around and make it’s way into the final beer. This same logic would mean it might also make sense to save the lower total oil hops for dry hopping. For this beer, I decided to go all Columbus in the boil and steep (on the high end of total oil with 2.5-4.5 mL/100g and cheap!). For dry hopping I’ve been curious for awhile about giving German Blanc hops a try, but not wanting it to be too one dimensional, I did a two stage dry hop with Mosaic. The first early dry hop with Mosaic during active fermentation and the second a keg hop addition (under pressure) all with German Blanc, to hopefully showcase this hop with a little depth from the Mosaic.

I generally rack my beer into a closed purged keg through the diptube, which has a 300 micron filter around it to keep out hops, which has always worked pretty well. But this time I wanted to try using the spigot on the big mouth bubbler and do an open transfer into a purged open keg (the horror!). This is appealing to me because for one it’s easier not having to mess with a racking cane and not having to disturb the beer by shoving the cane in is another plus. Keeping the fermenter closed (you do have to gently let air in so it flows out) is another bonus. But with the 300 micron stainless steel filter around the diptube, I can fill the keg without having to filter anything out of the fermenter. If some of the Mosaic hops from the first dry hop addition make it’s way into the keg, all the better! The keg dry hop addition seemed to create at least the illusion of a protective layer on the surface as the keg filled.

You can also see from the picture a food grade silicone tube dangling in the keg, this has a carbonation stone attached to it. I like this method for hoppy beers as it allows me to carbonate quickly and perfectly, removing any of the guessing game. But also I’m never purging the keg from lets say 30 psi to serving pressure potentially allowing hop aroma to escape. I leave the carbonation stone in the keg until it kicks.

My current process with a carbonation stone is:

1st time kegging open w/out a siphon w/ loose hops. O2 is a worry, but like the smooth transfer and closed fermenter pic.twitter.com/GYixpG0Q8u

Overall, a really nice beer! Mosaic and German Blanc blend together nicely almost coming off a little like Nelson Sauvin like in the dank/sweaty type of way. This danky sweaty aroma is complimented by a subtle grape and hop spice character. There is a candy type of sweetness to the aroma as well that reminds me of a bag of gummy worms! I certainly don’t get any lager characteristics from the Cal Common yeast. The mouthfeel is great, it’s fairly soft and slick. I’m uncertain how much of this is yeast derived, but I’m guessing this is mostly from the chloride and high oat addition. The finish is a littler dryer than I prefer, I probably could of mashed higher (around 160℉) or added some carapils. For a low ABV beer though, it does seem to drink bigger than it is despite the 1.009 final gravity. It’s difficult to tell how much interaction you get with the yeast and hops, but at least for this beer it certainly does seem to allow the hops to stand out. As far as using all Columbus in the boil and steep, I couldn’t say with confidence if I’m getting much or any of the typical Columbus flavor in the finished beer.

This beer doesn’t belong in the murky category in terms of clarity, but it’s certainly not showing any signs of clearing up either. Summing up the beer it’s hazy, low ABV, full of oats, fermented with a lager hybrid strain and warm, brewed with NEIPA practices, ignored whirlpool/steep hop combinations (focusing more on oils), and with 100% chloride–stealing some of my favorite traits across the styles! I don’t know what category this beer belongs to, but it’s a perfectly fine low ABV hoppy summer beer! I’m curious if anybody else has experience with the Cal Common strain and hops?