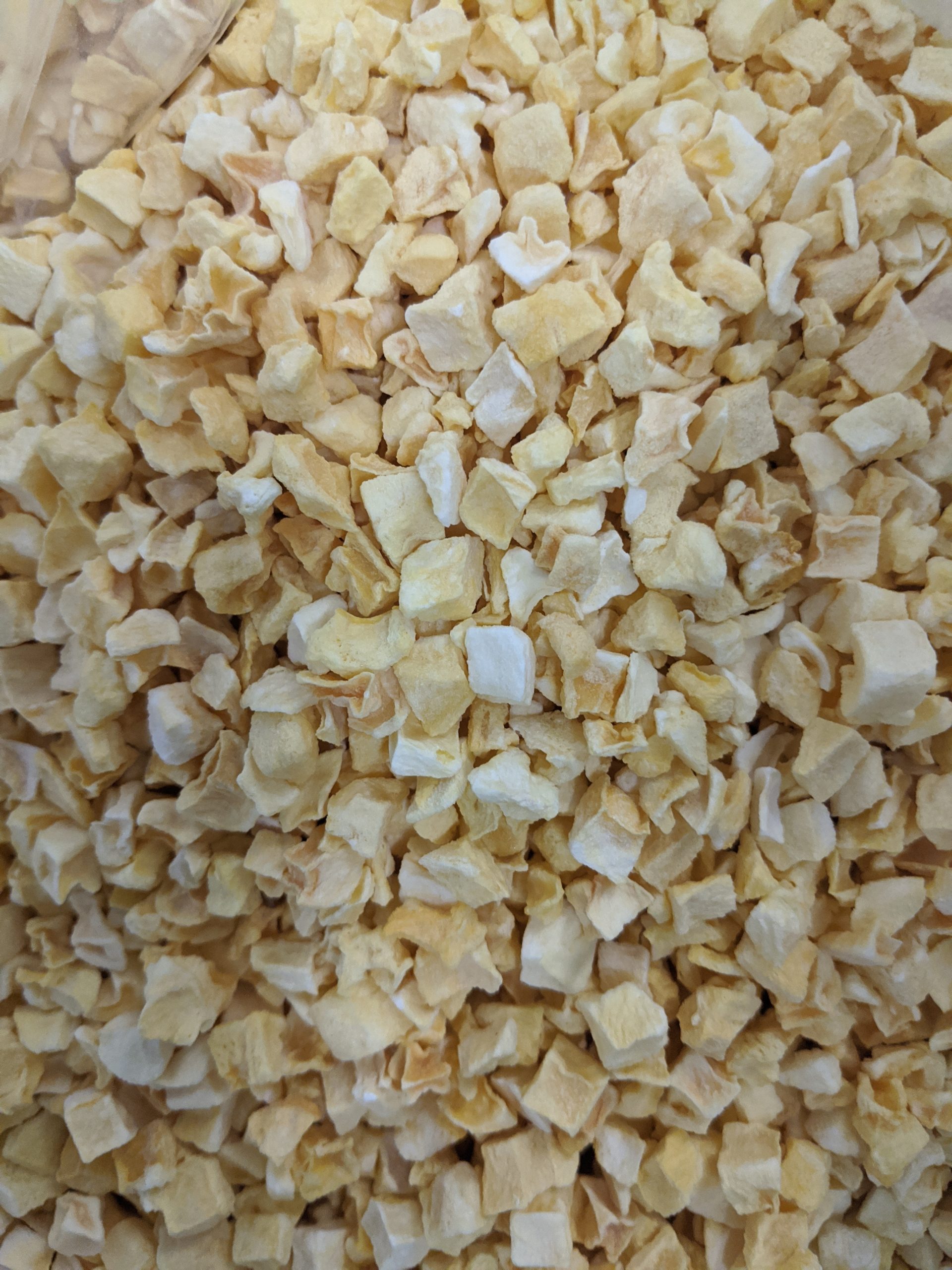 ot-side hop saturated flavor is an essential part of a great hazy IPA. Loading up an IPA with a massive charge of dry-hops alone doesn’t seem to be enough. These types of hazy IPAs lacking in hot-side flavor often come across as vegetal and flabby on the palate. The hop-derived “fruitiness” from the whirlpool helps to carry the dry-hopping. I’ve experimented with zero hot-side hops in the past, and the results weren’t great.

In this beer, I used a new experimental Cryo Hops® biotransformation blend (Bio-T) in the whirlpool, freeze-dried mango in primary, and 100% Citra dry-hopping post-fermentation all to try and push the perceived fruitiness to the max!

The base recipe for this is one of my favorites from Sapwood called Rings of Light (a 100% Citra session hazy pale ale). Mike has also blogged in more detail about the beer. On day two of fermentation in the 10 bbl tank I transferred out ~16-gallons into a fermenter with 2 pounds of freeze-dried mangos. Freeze-dried fruit is nice to consider because unlike dehydrated fruit where heat removes or alters some of the fresh fruit flavors, the freeze-drying process is supposed to retain more of these flavors and compounds.

Because water is removed from freeze-dried fruit leaving behind its sugar content, using it in beer will typically increase your gravity. This is different from using fresh fruit because the water in the fruit will dilute the sugar content. Generally, most fresh fruit additions have a gravity of around 1.050, and the freeze-dried version of that same fruit will have a higher gravity.

To calculate the increased gravity from coming from the fruit, I did the following: 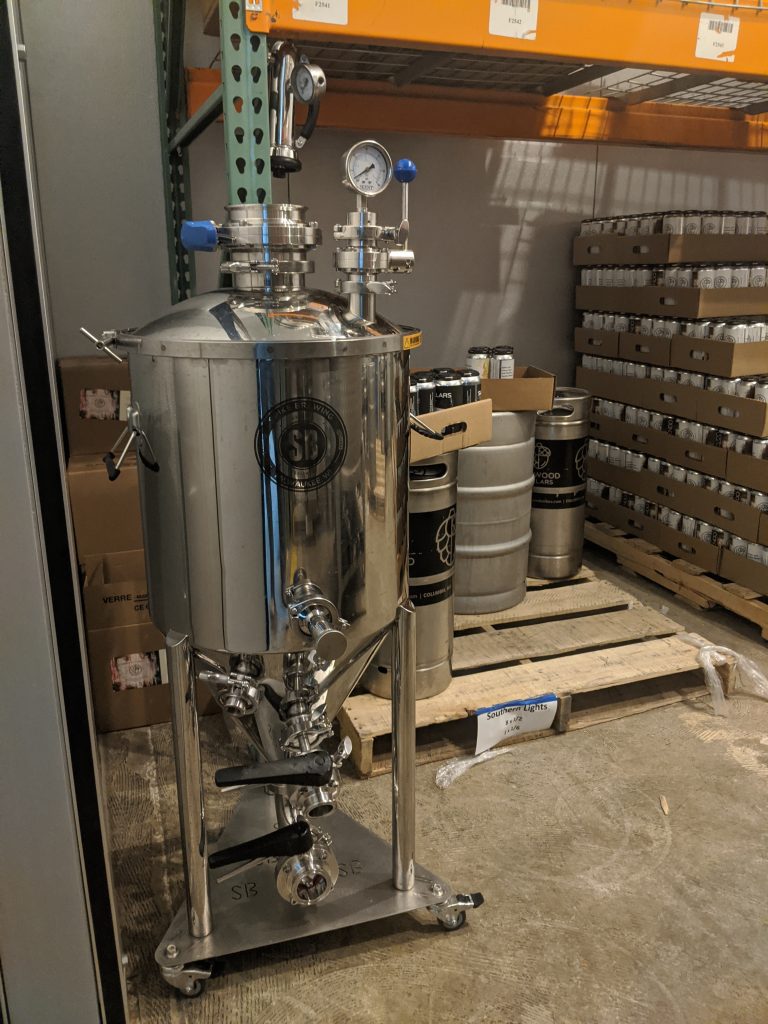 Two days after adding the freeze-dried mango (three days after the start of the base fermentation, gravity at 1.039), there was a clear difference in aroma at this point from the base batch. Despite both being a little “worty.” The mango was cleaner and brighter with a candied fruit aroma (circus peanuts, peachiOs, lucky charms marshmallow thing). Rings of Light from the 10bbl tank was still somewhat fruity, however.

I paid particular attention to the flavor of the base beer before dry hopping because of the use of a new product sent to us to try out from Yakima Chief called Bio-T Cryo® Blend. It’s Yakima Chief’s first time blending varieties into Cryo® pellets. The theory behind Bio-T is to create a blend that loaded in “survivables” (geraniol, linalool, 3MH, etc.). 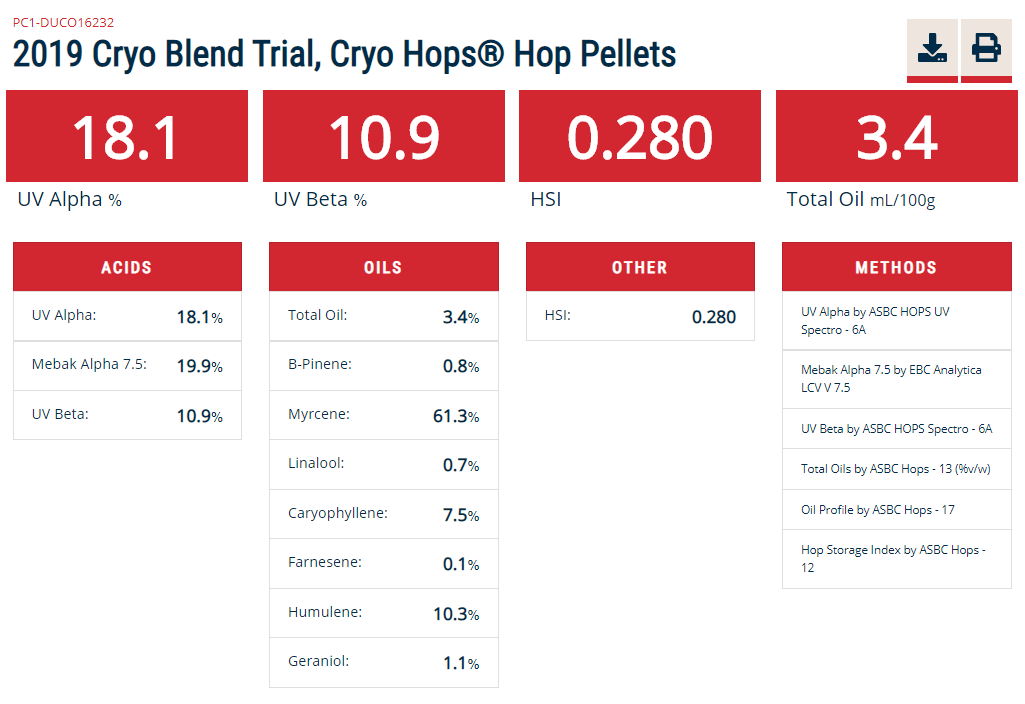 Looking a little closer at the Bio-T Cryo® Blend hop oil makeup, you can see it’s not crazy high in any one particular compound. Running it through a hop database calculator I’ve created to try and get a sense of new hop varieties, the overall figures most closely resembles Cascade, but with a more Centennial-like geraniol content. However, this is comparing Cryo® to T-90 hop pellets, the higher total oil in Cryo® would translate to more of those oils finding it’s way into the wort. The downside of using Cryo® on the hot-side is the higher alpha-acid content which can bring up the IBUs and increase the bitterness a little too much. I would typically add more hops to the whirlpool in this beer, but had to back down for this reason.

If some of Yakima Cheif’s Cascade Cryo® is being used in this blend I wouldn’t complain because I think it’s a prtty good hot-side hop. Cascade has a has a relatively low amount of free compounds and an extremely high amount of bound compounds that need to be released during fermentation (particularly 3MH precursors).1 One theory is that hops high in bound thiol precursors should be added during the late hopping phase to help cleave these precursors during fermentation. On the other hand, hops that are rich in free thiols can be added to the dry hop where enzyme activity from yeast isn’t required to release the aromatic compounds. Other hop varieties high in bound the 3MH thiol are Calypso, Saaz, and Hallertau, which might also be great late-hoping choices to try and utilize the most of the hop through fermentation.2

The liberation of bound thiols is done via an enzyme called β-lyase produced by yeast. Most yeast that have tested positive for β-lyase are not typical ale strains, but wine strains, which isn’t to say that typical ale strains don’t produce the enzyme, but they just haven’t been tested yet. Looking back, I probably should have considered adding a commercial enzyme to this beer during fermentation to try and push the release of 3MH (if Cascade is being used in the trial blend) as well as release any bound compounds that might still be available on the freeze-dried fruit. One such product is called Rapidase Revelation Aroma, which is designed for extraction of aroma precursors, typically thiols for white grapes, but theoretically could extract the same thiols in hops and other fruits. I would start experimenting with a dosage of 0.5 to 1 gram per 5-10 gallons of Rapidase Revelation Aroma. 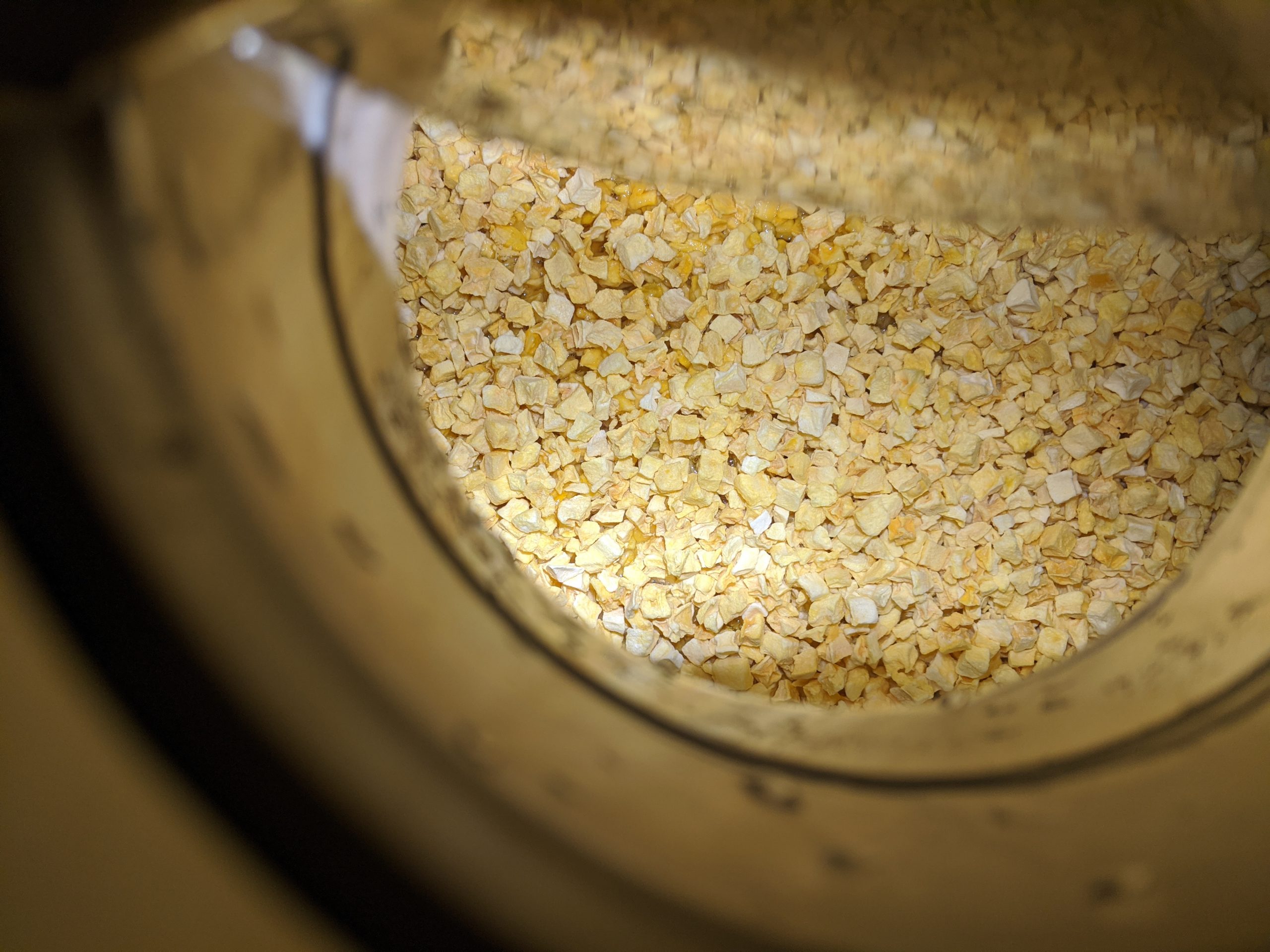 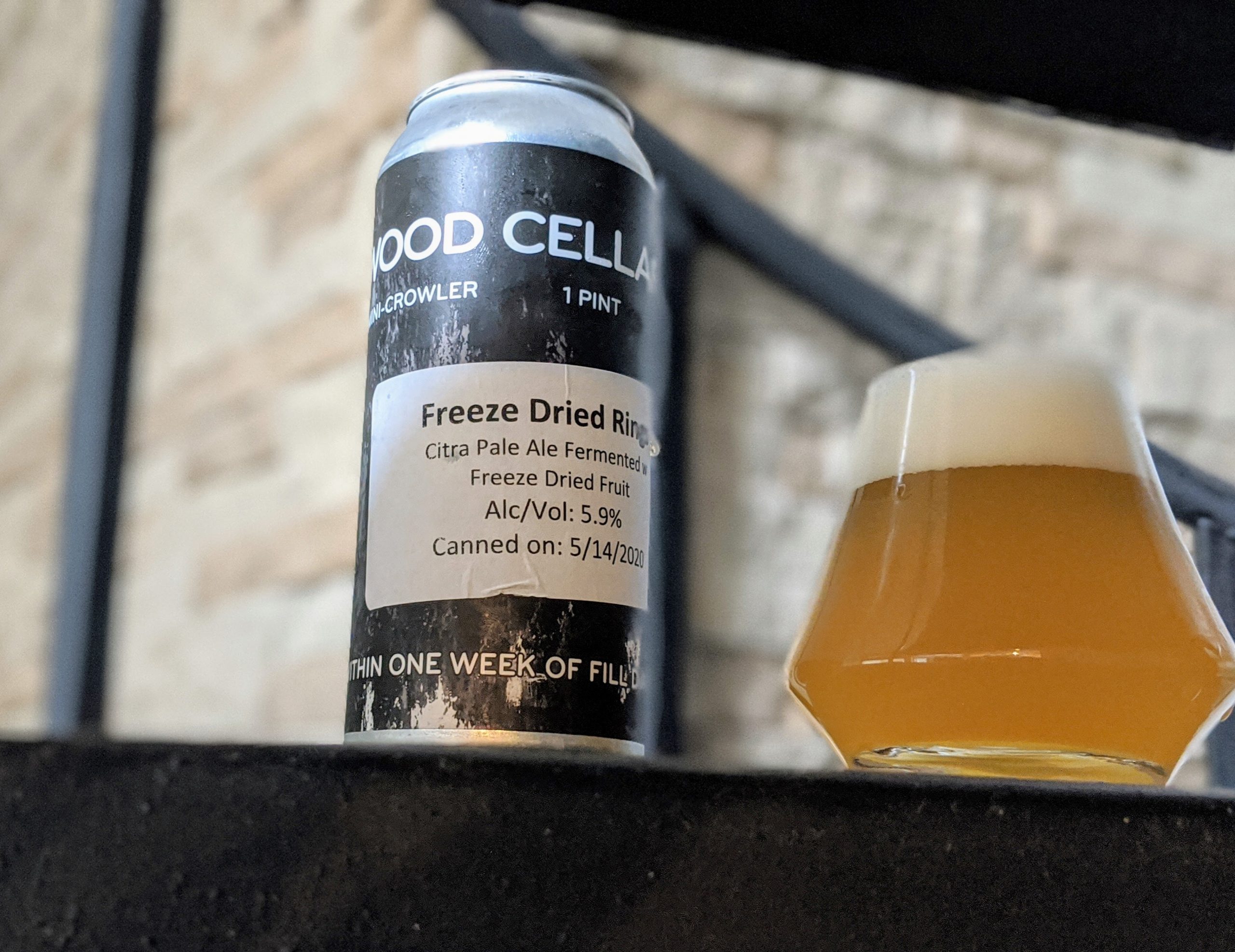 I was pleased with how this beer turned out considering it was an experimental batch testing out a new concept! The 100% Citra dry hop is dominating the aroma (which isn’t a bad thing). The mango fruit character is there, but it’s a light touch (I can pick it out most on the back end). If I didn’t know fruit was added during primary, I’m not sure I’d even pick it out, it’s kind of masked by what I would consider hop-flavor. On the other hand, if you tell somebody fruit was added, I don’t think they would have a hard time believing you.

Regarding the Cryo Hops® Bio-T blend, it’s hard to determine how much the blend is adding to the beer without doing direct side-by-sides. However, tasting the base beer (without the fruit) before dry hopping, I did get a pleasant orange/tangerine aroma. Without sending a beer to a lab to get tested for final hop compounds, it’s impossible to say how much biotransformation is taking place due to the makeup of oils of the blend. I do wish it was slightly lower in alpha-acids so I could load up the whirlpool with even more hops to try and push as many hop compounds as possible into the fermenter without picking up too much bitterness.

I think the addition of the freeze-dried fruit helps to brighten up the beer compared to the base. For what it’s worth, I could pick out the mango much more before dry hopping suggesting the dry hops are masking the aroma a bit. When it comes to adding fruit during active fermentation, much like with adding dry hops during fermentation, many of the aromatic compounds can be scrubbed so I’m not surprised it’s not super mango-forward. In this case, the addition helps to make the beer more layered and complex without taking over completely.

The downside of using freeze-dried fruit during active-fermentation like this is there doesn’t seem to be a great way to sanitize it. This isn’t a problem for the most part, especially if you keep the beer cold after packaging and drink relatively quickly. However, I’d be nervous about doing a big canning run at the brewery using this method. With this batch in mind, we plan to use freeze-dried mango powder in the whirlpool in an upcoming fruited DIPA collaboration with Great Notion. Here, the whirlpool temperature should help sanitize the powder and hopefully give us a good hop/fruity saturated foundation to accompany more fruit and hops on the cold-side!

We sent a few mini-crowlers (16 ounce cans) of this beer out into the wild if you’re interested to see what people other than myself thought of this little experiment on Untapped!