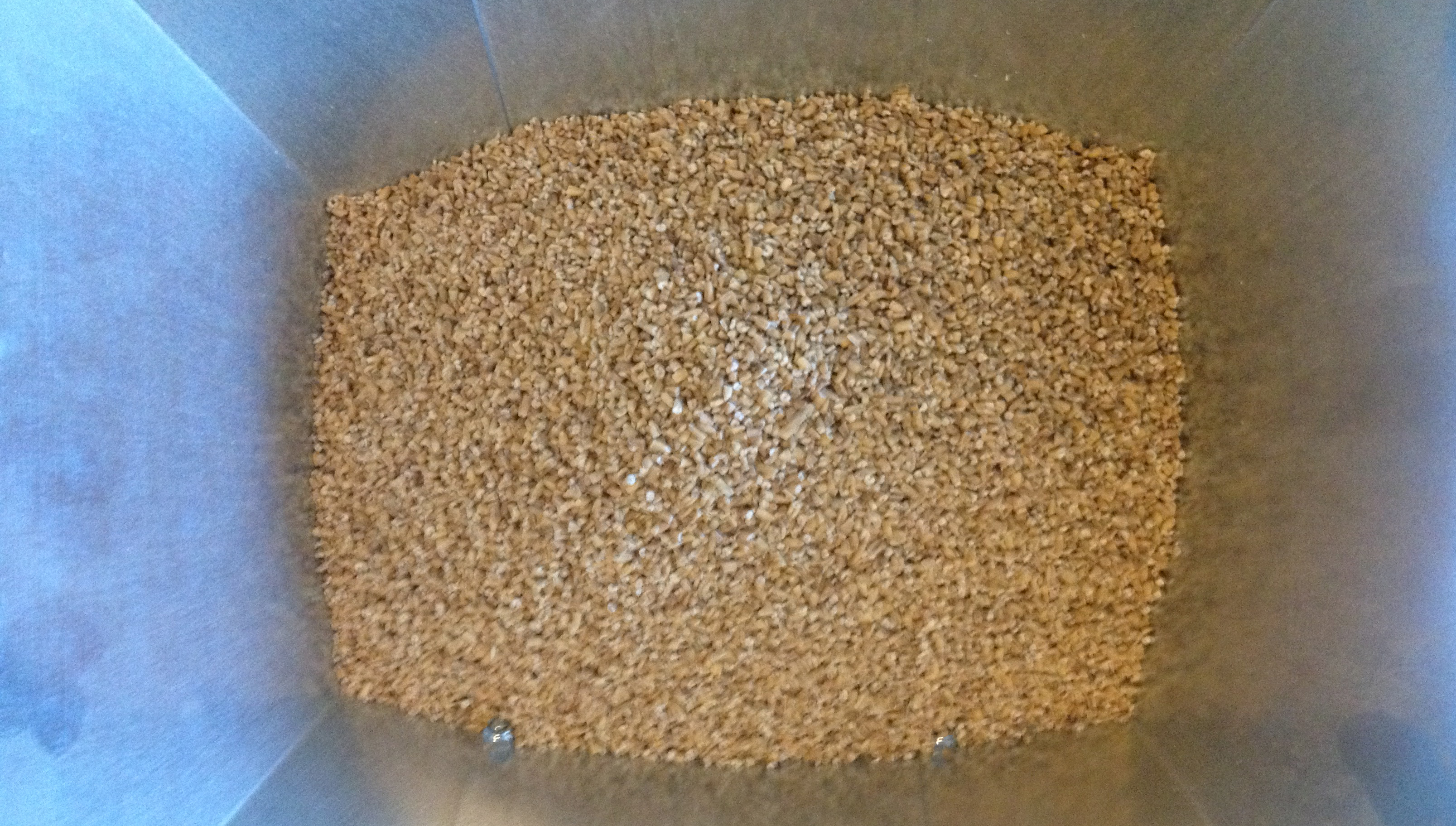 After doing the research for a post on the potential benefits of brewing with oats, I decided to put the research to practice and brew a beer with 40% raw steel cut oat groats. Because oats have the potential to reduce the fermentability of wort, I went with a hoppy session beer. I used 6-row as the base in hopes of thinning the mash (to compensate for the viscosity the oats will impart) as well as the added benefit of increased enzymes (although not necessary). 6-row malt also has a slightly higher protein percentage than 2-row, which I hope will help with the head retention that can suffer as a result of the higher oat percentage. I used all New Zealand Rakau hops in the boil, which are higher in low cohumulone as a percentage of acids, which might also help with the head retention.

I ran the wort into the boil pot slowly to try to prevent a stuck sparge, which I surprisingly had little trouble with despite 40% oats (6-row may have helped with this). It took 2 hours to reach full conversion when adding the raw milled oat groats directly to the mash (without doing a cereal mash). Because I did a no-sparge (all the water added to the mash at once) I wonder if the conversion was slowed by a dilution of the enzymes. The research suggested that the mash pH would be lower with the increased volume of oats, but I didn’t see this, I had a mash pH of 5.22 40 minutes into the mash that dropped to 5.1 at 90 minutes. I probably could have back off the acidulated malt a tad. I saved and froze (in mason jars) some of the leftover wort from this mash to use as yeast starters for the future based on the research suggesting oats are beneficial for yeast health.

The research suggested that oats might reduce the lag time by having faster yeast growth, I don’t have a way to actual measure this, but fermentation did appear to begin quickly. Less than 15 hours post-pitch I checked on the ferment and it was already visible fermenting (picture below) which means it was likely going hours before I looked. Three days into fermentation when I added the dry hops (which I had to dig a hole into the yeast to do), I also top cropped a mason jar of the yeast, it was either that or move to a blow-off.

Freshly top cropped Boddington yeast. It was either that or switch to a blow off! pic.twitter.com/KXMQbeIGMZ

Just 9 days post brewday I’m already enjoying this beer. It’s definitely cloudy, as expected with the big addition of oats as well as the Boddington yeast strain and dry hops.

Head retention is OK considering the healthy addition of oats. Below is a picture about 3 minutes post pour, you can see it’s trying to hang around. After awhile it does dissipate to a really thin layer. I think the 6-row might have helped the foam a bit considering I’ve used flaked oats in smaller amounts and had less retention than this beer is getting (it could be improved however). With a mash of 157F and 40% oats, I did see a drop in fermentability. The final gravity of 1.016 is just about right in my opinion for a session IPA like this.

Overall, it’s a pretty damn good low ABV beer. The mouthfeel is incredibly smooth! The oats, yeast strain, and chloride seem to be combining nicely here. Aroma out of the glass is of mellow fruits like strawberries and peaches with a little bit of citrus character (orange lifesavers come to mind). I’ve been a little disappointed in this particular pound of Citra I purchased and used in this beer, but even still, there is a decent aroma in this beer. At just 4.5%, this beer does have a good deal of flavor! Some malted spelt/wheat or carapils might be a good addition to help give this extremely smooth mouthfeel some more depth. I purposely left whirlpool hops out of this beer and added a small 10 gram charge of Citra pre-ferment to see how this would affect the perceived hop flavor of the beer. The hop oils removed during fermentation seem to be so great that huge whirlpool hops are becoming more questionable to me. This beer is only increasing my skepticism, there is definitely a hop flavor that follows the aroma in here. Perhaps the hop flavor would have been intensified with some whirlpool hops, but at the very least it seems that whirlpool additions can be cut back a little in hop forward beers and shifted more towards the dry hop.