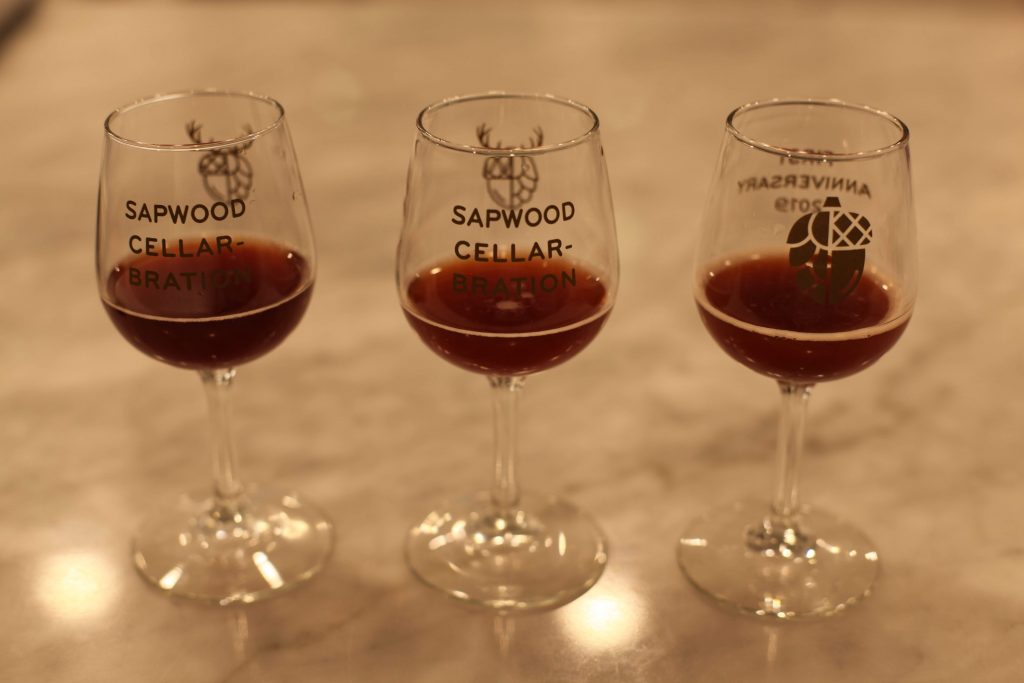 I ‘ve had a 15-gallon barrel running yearly turns of mixed-fermented beer at home for over five years now. Once a year, I empty it and refill it that same day with a pre-fermented beer. Most of the beer is usually re-fermented with fruit, or I’ll bottle off a small amount of the base beer.  My process is pretty simple and straightforward, after emptying the barrel with gravity and a siphon, I rinse it with 180°F (82°C). I figure this is good enough to bring down the bacteria culture a bit as well as to get any yeast and trub gunk out of the barrel. I’m not worried about killing off the bacteria, it’s forever living in the staves (choose your dregs wisely). After adding dregs from a trip to Belgium three years ago, I haven’t added any new microbes to the barrel.

After working and learning from Mike at Sapwood Cellars, I’ve realized how important and valuable multiple barrels with different microbes in each is for blending and bottling amazing sour beer. Because of this, I’ve pretty much shifted to fruiting all of the beer that comes out of my personal barrel at home. It’s not that the bugs in the barrel aren’t producing good beer; it’s just that I’ve been spoiled with the experience of having over 50 barrels to pull from when coming up with a blend. So, although I think the base beer my barrel is producing is pretty good, I know how much better it could be with some blending options!

At such high fruiting rates, you have to take into consideration how much space in the fermenter the fruit will occupy and keep that figure in mind to know how much beer you will actually get on the fruit. In my case, using 5-gallon plastic carboys, I can usually get about 4 gallons of beer on ~8 pounds of fruit. Because fruit is mostly water and 1-gallon of water weighs 8 pounds, you can estimate that for every 8 pounds of fruit used will take up about 1-gallon of space in the carboy.

For this year’s brew (brewed in 2018 and taken out of the barrel in 2019), I teamed up with my friend Trevor Fisher. I brewed 10-gallons of a Flanders Red base at home, and he brewed 5-gallons at his place with his Grain Father. We both fermented the beer with wine yeast (58W3) in three separate fermenters and transferred into the barrel after primary fermentation was complete. I’m not super picky when it comes to a primary yeast strain for barrel-aged sour beers because so much of the flavor profile is coming from the bacteria in the barrel with months of aging, not to mention the high fruiting rates. We’ve used 58W3 as a primary fermenter at the brewery for a similar base beer that went into barrels and was happy with the result. In my experience as a primary fermenter, 58W3 leaves the beer at a fairly high finishing gravity (1.020+), which leaves the bacteria plenty to chew on in the barrel. Although the wine yeast produced a slightly phenolic beer after primary fermentation, this was completely altered in the barrel.

After having success the previous year with re-fermenting barrel-aged beer on fruit with additional fresh wine yeast (71B-122) and a commercial biotransformation enzyme, I decided to do that again with this batch. Fruit has many volatile free aromas and flavors, but can also contain up to two-five times more aromas bound to glucose (glucosides). These bound aromas can be released with the help of an enzyme called beta-glucosidase.1 Thanks to research in the wine world, we know that the strain 71B-122 is a high producer of the β-glucosidase enzyme, which was tested with activity over 100,000 U/g. 2 Despite the enzyme preferring a higher beer pH (4.5-5.2), it’s still my hope that pitching a hydrated pack of 71B-1122 with the fruit re-fermentation might still release bound compounds.

Fruit also contains bound fruity thiols that are present in the form of precursors on the outer layer (skin) of the fruit (exocarp), which can also be released with the help of an enzyme. The difference with thiols, it’s not glycosidically-bound compounds, rather thiol precursors (two separate pathways to biotransformation) that need to be released for additional flavor compounds. The liberation of these bound thiols is done with the enzyme called beta-lyase. There has been a number of wine yeasts studied that have been tested to produce to release additional thiols during fermentation (like VIN 7 and VIN 13). 3 For this beer, I chose to add a commercial enzyme that is advertised to release bound thiols called Revelation Expression Aroma from Scott Labs. The idea is to get potential biotransformation on two fronts, both from releasing bound glycosides on the fruit with 71B-1122 (β-glucosidase activity) and releasing bound thiols with Revelation Expression Aroma. 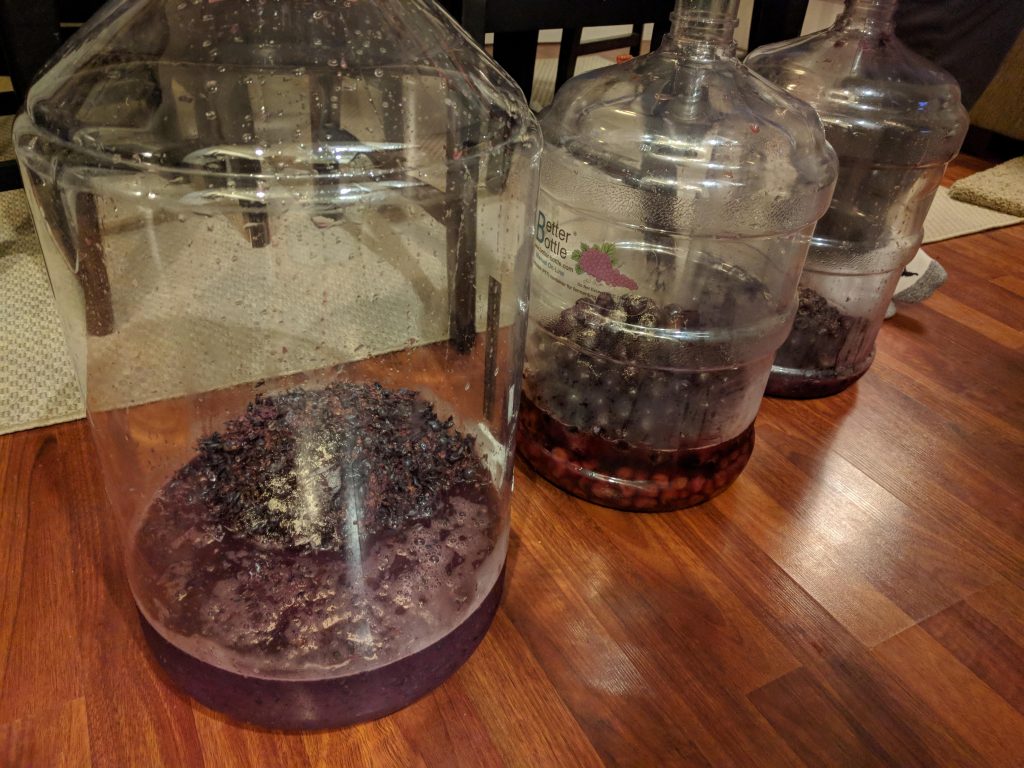 Cabernet Sauvignon Grapes – ~5 gallons racked out of the barrel onto thirteen pounds of frozen and thawed Washington Cabernet Sauvignon grapes with .5 grams of Rapidase Revelation Expression Aroma and 2 grams of Lavlin re-hydrated 71B-122 and after four months, racked to a bottling keg with water/sugar solution to reach approximately 2.4 volumes of CO2. Fruiting rate of 2.6 pounds/gallon (300 grams/liter).

Tart and Sweet Cherries – ~4 gallons racked out of the barrel onto 4 pounds frozen and thawed sweet cherries and 8 pounds frozen and thawed tart cherries with 5 grams of Rapidase Revelation Expression Aroma and 2 grams of re-hydrated Lavlin 71B-122. After four months, racked to a bottling keg with water/sugar solution to reach approximately 2.4 volumes of CO2. Fruiting rate of 3 pounds/gallon (360 grams/liter).

Cabernet Sauvignon Grapes and Tart Cherries – ~4 gallons racked out of the barrel onto 6 pounds frozen and thawed tart cherries and 6 pounds frozen and thawed Washington Cabernet Sauvignon grapes with 5 grams of Rapidase Revelation Expression Aroma and 2 grams of re-hydrated Lavlin 71B-122 and after four months, racked to a bottling keg with water/sugar solution to reach approximately 2.4 volumes of CO2. Fruiting rate of 3 pounds/gallon (360 grams/liter).

Cabernet Sauvignon (3.10 pH) – Natural wine-like nose, light lambicy rubber funk, unsweetened cranberry/raspberry juice, firm acidity. Pours with a decent head that the acid quickly eats away, like the enamel on my teeth. A little too tart for me. Softer mouthfeel would be nice. Slightly metallic with earthy undertones.

Cherry-Cherry (3.05 pH)- Cherry pit almond and cherry/rhubarb pie aromas dominate. The cherry pit-like aroma seems to help to soften the extreme acidy a bit (although it’s still too sour for me). Candy descriptors are always are a favorite of mine and red sour patch kids stand out for this one. Super jammy and bright nose, not much I would want to change here overall in terms of the nose.

Cabernet Sauvignon + Sweet Cherry + Tart Cherry (3.03 pH) – Slightly metallic and again with some lambicy rubber funk. This blend has more complex and rounded flavors overall and is my favorite of the three. Fresh, bright fruit flavors on the nose and not nearly as cranberry forward as the straight Cabernet Sauvignon beer. Super sharp acidity. I’ve really been enjoying mix-fermented beers lately that use a blend of wine grapes and fruit.

Overall, I’m super happy with how these beers evolved overtime in flavor and aroma. The fruit flavor (no surprise considering high rates) is super punchy and jammy among all three of the beers. Although the fruit dominates, there’s just enough light funk in the base beer that barely shows itself but without getting in the way. I love how much complexity you can shove into a glass of a mix-fermented barrel-aged fruited beer. Attempting to push the bacteria and yeast interactions with the fruit (and commercial enzyme) seems to be working nicely despite the conditions not being ideal for the enzymes. I don’t have a side-by-side or lab tests of the compounds to show biotransformation, but after a couple of years of doing this, I’ve been pleased enough to continue the move.

The biggest flaw in this years batch is the extreme acidity. It’s hard to give a pH range of where I prefer to drink sour beers as factors like residual sweetness, type of fruit used, grist, etc. can all play a roll in the final perception. However, with this particular recipe (and with all three fruiting choices), a pH close to 3.0 is just too tart for me to enjoy a full bottle solo. I’ll have to take a pH reading of the Flanders Red base I refilled the barrel with after emptying it for this post’s beer to determine what to do next with the barrel. If it’s screaming sour around the time of either packaging or adding fruit after about a year in the barrel, then it might be time to retire the barrel and the bugs in it. If this were at the brewery, I’d probably keep the barrel around to use as a blending component with other barrels that have the opposite problem, too high of a pH. We’ll have to wait and see! 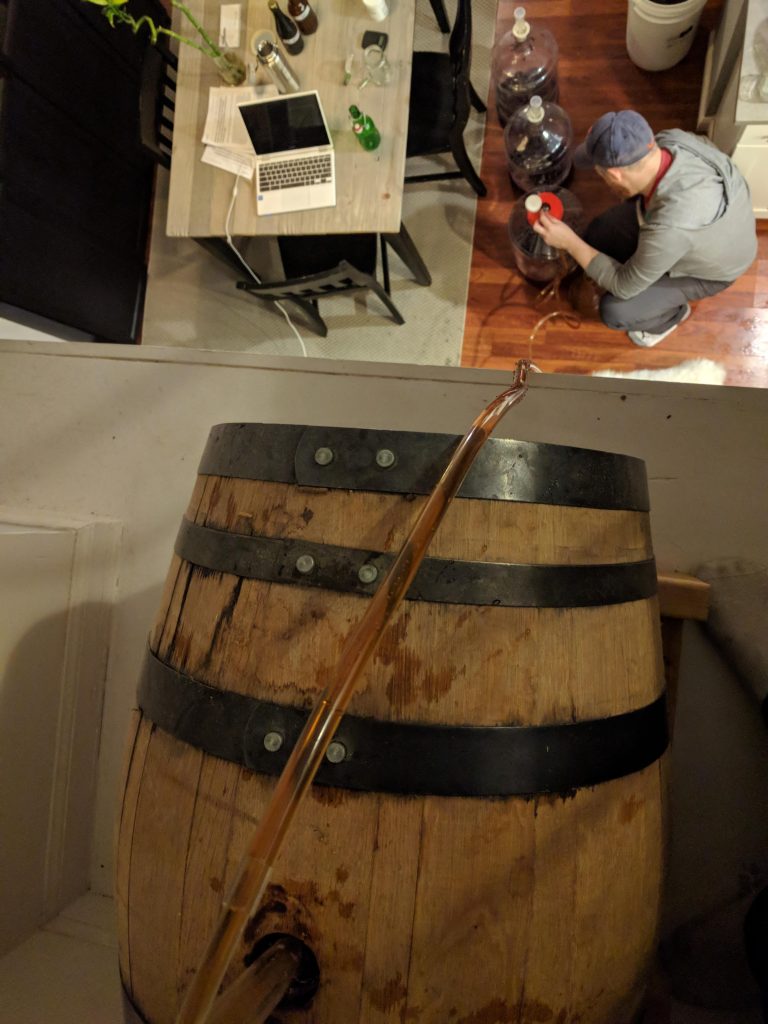