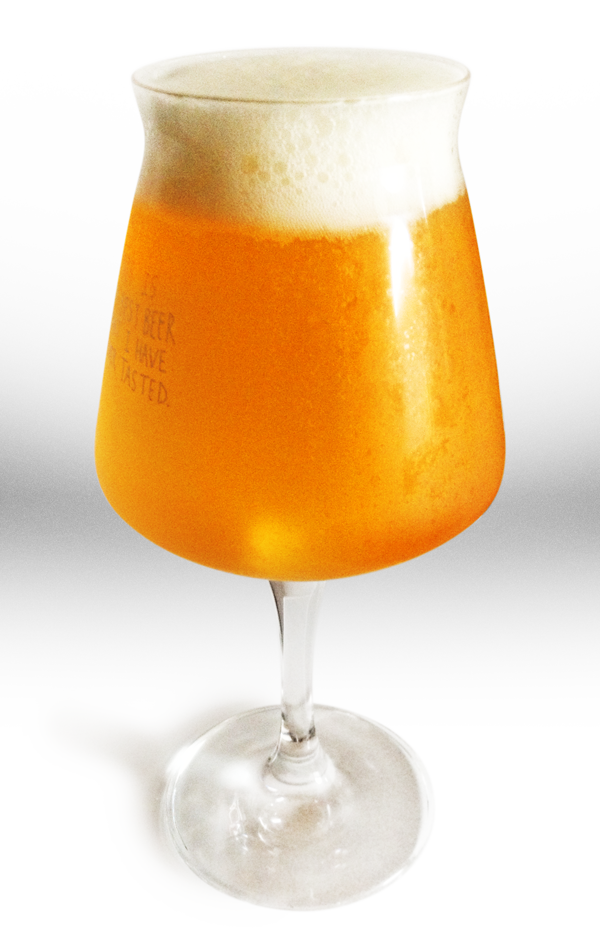 It’s been common knowledge in the homebrew community for years that dry hopping for extended periods leads to grassy flavors in your beer. I’ve dry hopped for as long as a few months before and never experienced this for myself. For this beer I put this concept to the test with a five month dry hop in a tart saison!

I’m a big fan of Tired Hands HopHands Saison and I’ve had relatively good success building up the yeast right from their growlers (worked twice, failed twice). My old culture is about 2 years old and in need of a fresh reboot (the more I re-pitched the yeast, the more of a funky sweaty foot character I got). After getting a fresh half growler from the brewery, I built up the settled yeast at the bottom of the bottle in three steps until I had a 1.75 liter starter, which I decanted and pitched.

My previous experience with the yeast and bacteria blend (I’m not sure what exactly is in it) is that after sitting a few months the pH typically would drop into a noticeably tart range that I really enjoy combined with some dry hops. I wanted to try and combine this aging/souring process with an extremely long extended dry hop, so I let this beer ferment like normal for a little over two weeks until I racked it into a sealed keg with dry hops in a fine mesh bag and let it sit for five months!

The extended dry hopping combined with Brettanomyces might also take advantage of the release of flavor active compounds from hop glycosides. The idea here is that Brettanomyces has the potential to release “locked” in flavors by β-glucosidase enzymes, which are found in Brettanomyces strains.1

For the dry hopping I wanted to try out a few varieties that I was hoping might play well with a funky tart saison base. New Zealand Dr. Rudi is supposed to lean more green fruit like with hints of herbal and floral characteristics with descriptors all over the place with quince, gooseberry, lovage, liquorice, spicy herbal leek, sage, and even white jelly beans.2 My previous experience in a single hopped beer with Dr. Rudi I described it as more herbal than fruity and made a note that it might be good in saison. I combined Dr. Rudi with little bit of Stryian Golding from Slovenia, which I’ve heard can be a like it or hate it kind of hop (which is partly why I went with a small addition). Sticking with the green fruit and herbal flavors, Stryian Golding is described as lemon tea, peppermint, iced tea, lemon grass, spicy herbal.3

In previous research I discovered a study that found significant decrease of aging indicators was found in beers made with 30-40% oats. They found a big reduction in both heat indicators as well as staling components. In some cases, the reductions were as high as 79%-83%.4 So it seems like a good idea to me to give a beer intended to be aged a healthy dose of oats! I probably could have gone even higher than 15%, but the oats post was created after this beer was brewed.

Strange aroma of green sour fruits, mostly lime and green apple (little lemon as well) with a strong straw like funkiness that all combines to come across a little mossy to me. The hop flavors almost seem infused into this beer; I suspect this has more to do with the acidity than the extended dry hop. I definitely do not detect any grassy flavors or aromas, despite the hops being in contact for months with the beer. As it warms up, a bit of acetic acid comes through mixed with a hint of rubber, which I’d prefer to have toned down a bit. The mouthfeel is actually pretty nice, just a little smoother and richer than you’d expect from the tart like aroma (final gravity was relatively high for a soured saison at 1.010).

There is very little head retention, which is pretty standard in all the lower pH beers I’ve brewed lately. I’ve thought about giving Kalsec’s Head Master a try, which consists of hop acids that are supposed to improve beer foam as well as mouthfeel. There is just something unromantic about this type of process that has prevented me from giving it a try so far though.

Overall, I kinda enjoy this beer despite it being little strange. I doubt I’ll use this harvested Tired Hands strain in another beer, it’s just a little too funky/rubbery for me. I do however plan to give this method of combining the aging/souring time with a long dry hop in a future beer!