I’ve got a good friend who brews regularly with both the Heady Topper (Conan/Vermont) yeast strain and the rumored Hill Farmstead and Tired Hands yeast strain (London Ale III™ 1318) and he seems to change his mind daily on which one he enjoys more.  Having tasted many of his beers with both strains and others who have experimented with the London Ale strain, I can see why. When brewed with techniques to achieve maximum hop flavor and aroma without that sucking on a grapefruit bitterness, these two strains seem to produce excellent hoppy beers.

Having mostly brewed hoppy beers with WLP002, I decided to branch out and try these strains for myself.  I chose to do a side-by-side experiment comparing two identical beers fermented with two different yeast strains, in this case I used Wyeast 1318 London Ale III vs. GY054-Vermont IPA. Recipe and Results below. 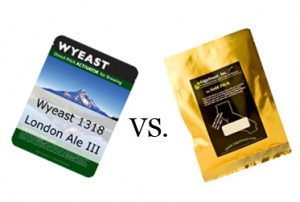 All of the hops were added to a purged keg in a fine mesh bag. Racked beer on top of hops and left at room temperature (76F) for 24 hours, then into the keezer. Hops remained in the kegs until it kicked.

I took a growler of each beer to a DC Homebrewers meeting and forced people to do side-by-side tastings of each beer. They were aware that the beers were identical except for the yeast strains. I didn’t do a triangle test like the homebrewing pros do, but I did my best to tally up the results as people tasted the beers throughout the night.

Overall, 15 different people tasted both beers and reported back to me their preferences. Overall, only 4 preferred the Wyeast 1318 London Ale III fermented beer and 11 or almost 74% preferred the GY054-Vermont IPA fermented beer.  Of those that preferred the GY054-Vermont IPA beer said they thought the beer was, “brighter, livelier, bigger tropical aroma, sharper, and generally more interesting.” Of those that preferred the Wyeast 1318 London Ale III beer said the beer was, “smoother, softer, and more in balance.” One person described the London Ale beer as being musty compared to the Vermont strain.

This was by no means an organized tasting, rather a homebrew meeting free for all where I did my best to put people on the spot. I should also say that some probably had a pretty shot pallet after tasting everyone’s beers that night and the results are likely largely influenced simply by personal preferences rather than one strain being better than the other. However, the results do go tend to agree with how others have described the two strains. I should note that most of the people who tried these beers did know the two strains used prior to tasting, which I’m sure influenced their descriptors a bit. It was still interesting though that not knowing which beer was which, their descriptors were pretty spot on to how the manufacturers describe the two strains (below).

GY054-Vermont IPA
Description: From one of the best examples of an east coast IPA.  This yeast attenuates slightly less than NorCal Ale #1 and leaves a beer with more body and a slight fruity ester that is amazing with aromatic hops.  Good choice for high gravity beers and hoppy styles.  Broad temperature range and moderate flocculation make this yeast a versatile house strain.

Wyeast Laboratories. London Ale III™ 1318
Description: Originating from a traditional London brewery, this yeast has a wonderful malt and hop profile. It is a true top cropping strain with a fruity, very light and softly balanced palate. This strain will finish slightly sweet.

My Impression:  Well, the GY054-Vermont IPA keg kicked about 3 weeks before the Wyeast 1318 London Ale III beer, so I guess there is my answer to which one I preferred. I thought the aroma of the GY054-Vermont IPA really popped, almost like a freshly opened pack of life savers (orange ones especially).  Even after 2 months in the keg the aroma was still fresh and bright, this is likely due in part of the keg hops, which seems to prolong the life of hoppy beers in my experience.

I thought the aroma of the 1318 London Ale III beer was slightly similar but turned down about 20% and a little more true to the hops used, meaning less of a yeast  derived fruity character blended in with the hops. I never did pick up on a distinct peach character that I often read about for the Vermont strain, but this could be because of the blend of hops used. Rather than a huge sticky orange lifesavers aroma, the London strain was more of an orange sherbert with a slight lemon/lime thing. Both beers also had a pretty significant dank aroma. This is the second time I’ve noted this when dry hopping with both Mosaic and Simcoe. Overall though, if you just took a quick whiff of both beers, I could see how you would say they were  pretty similar.

The mouthfeel of the 1318 London Ale III beer was a little smoother and softer, but not as much as I was anticipating. In fact, I was pretty impressed with the softness of the both these strains. The mash consisted of about 18% flaked grains, so that likely contributed. For my preferences, I would give the mouthfeel edge to the London strain. As far as looks go, neither beer cleared up much, but the London strain was noticeably cloudier.

Both beers were nice, soft creamy body, big hop tropical dankness. I recently brewed with some of the harvested London Ale yeast in a Citra/Amarillo session IPA and again really enjoyed this yeast in a hoppy low ABV beer!

[UPDATE] After re-brewing with both the 1318 London Ale III strain and the Vermont strain a number of times now, I’d prefer 1318 out of the two. I seemed to get inconsistent results with the Vermont strain after subsequent brews, some times seeming to lose the fruity esters all together. With 1318, I continually get great body and mouthfeel, but I do tend to get a grainy/malty aftertaste with this strain that I could do without (I’m being incredibly picky with this complaint, but I think it’s worth pointing out).

Below are my personal tasting results charted. 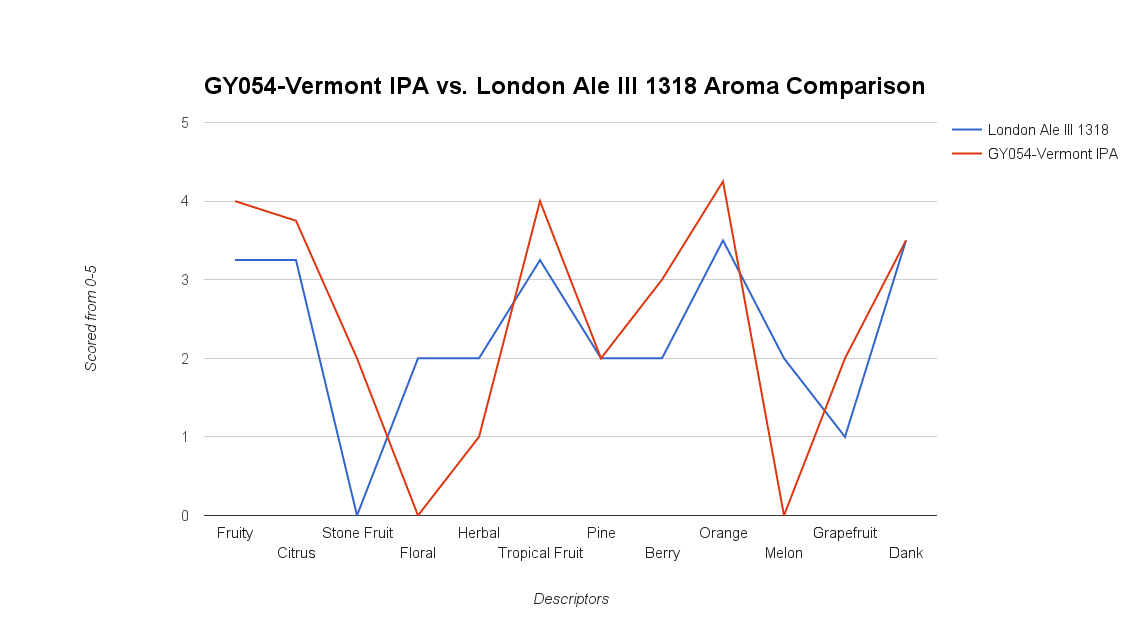 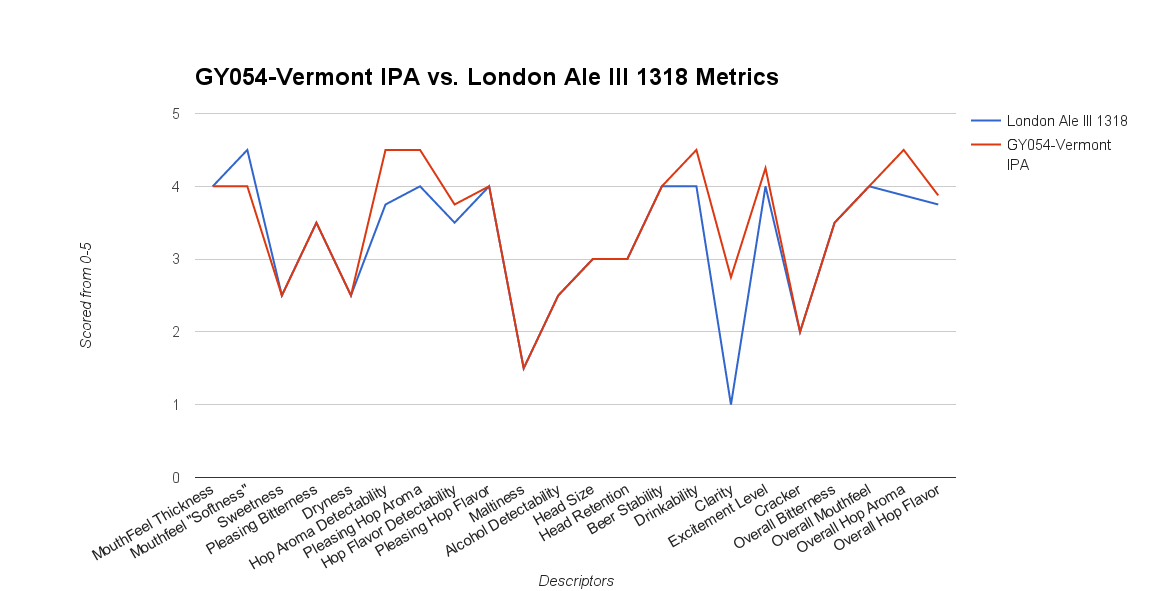