This certainly wasn’t the 5-gallon half of the 10-gallon batch I was most excited about on brew day, but after losing the full keg of the NEIPA half to the bottom of my kegerator, I shifted my excitement to the Saison half quickly!

Full keg of my 100% malted wheat WLP007 NEIPA gone in record time because it was so damn good! Or my ball lock wasn't completely seated… pic.twitter.com/FyIvCVTXoM

One of the issues I have when trying to mix together a “Saison” blend of yeast and bacteria is that it seems the Saison strains I include dominate the fermentation and don’t leave much for the Brett and bacteria to do, even with extended aging. I’m usually left wanting more fruity-funk character, less of that Saison spice dryness, more mouthfeel, and more acidity. In this blend attempt, I went with the French Saison strain (Wyeast 3711), a blend of six Brettanomyces strains in the Yeast Bay’s Amalgamation blend along with dregs of Tired Hands Freedom From the Known blend, which I’ve had success in the past with fairly short souring durations. My thought process was that my primary strain would give me a little “Saison” character with a nice soft mouthfeel that 3711 can provide, a blend of Brett strains that are supposed to lean towards the fruity side of funk and a quick souring blend for a little acidity.

Being the grist was 100% malted wheat, I avoided the concerns of a stuck sparge by using a newly purchased mash filter bag (inspired by the Brulosophy folks). I’ve struggled on and off with stuck sparges when doing strange grists like with huge amounts of oats, or flaked grains (kamut, quinoa, wheat), and even using wheat and rye flour at times. I hope to permanently solve these stuck sparges with this bag. So far I’ve adjusted my mill to narrow the gap for finer crush and done a few high oat beers and this 100% malted wheat beer with zero issues. So far so good! 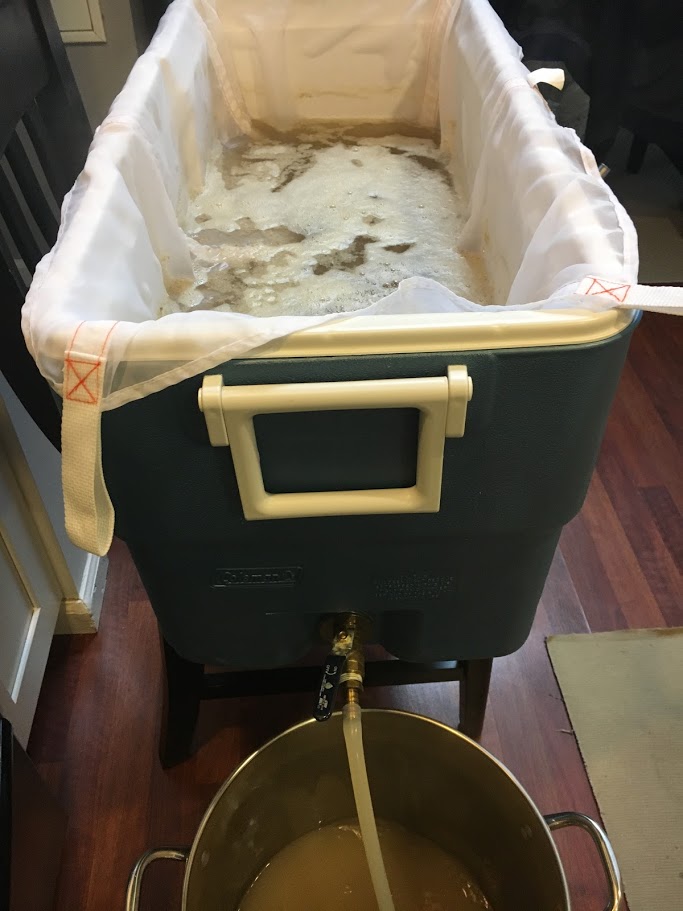 After five weeks in primary, I gave the beer a sample and wasn’t thrilled with where I was at. Already down to 1.002 there wasn’t much noticeable acidity and the overall character was a little spicy, dry, and a fair amount funk that leaned a bit metallic. So again, I didn’t quite get the results from the blend of yeast and bacteria I was hoping for. I wasn’t originally planning on adding fruit to this beer, but I thought I needed to do something to it or it would be something I’d have on tap forever! I decided to fruit it with mango, hoping it would add a nice soft mellow flavor with some “fruit” aroma to make up for the lack of fruit-funk I wanted. Rather than rack the beer into secondary to age on the fruit, I decided to experiment with carbonating the beer with the fruit addition by adding it directly to a keg and sealing it up. I used a 4-pound bag of organic frozen mango chunks, which I first pulsed in a Vitamix to break it up a bit more to encourage more extraction. With a filter around the dip tube, I wasn’t worried about clogging anything and with a spunding valve set to 25 PSI (which at room temperature should get me to around 2.4 volumes of CO2) I wasn’t afraid of over carbonating the beer. I also wondered if the sealed fruit addition might help preserve some of the subtle mango characteristics by not being bubbled out of an airlock. 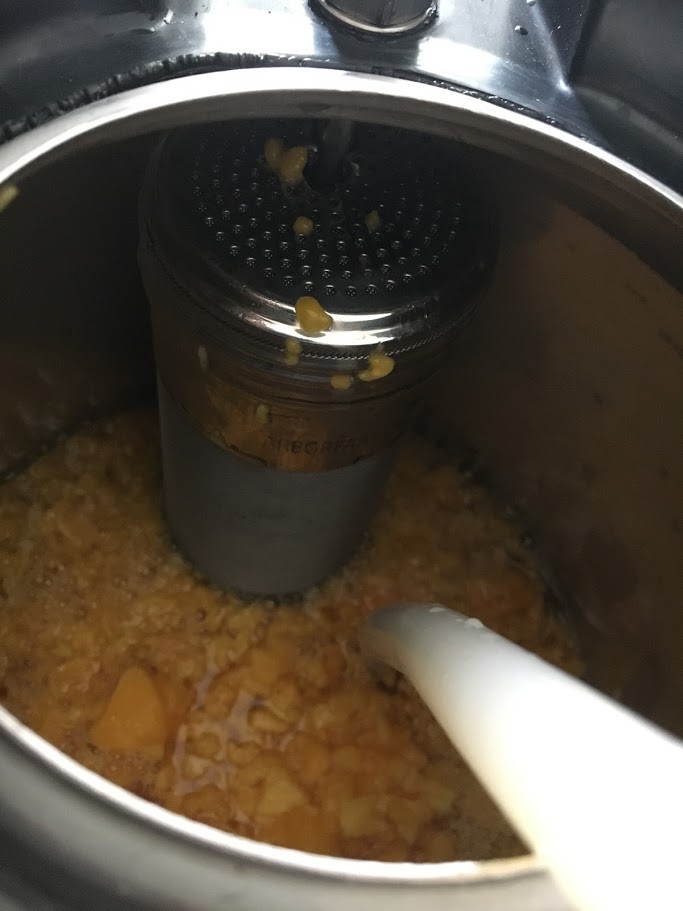 Racking into the keg after purging it and the mango chunks

I also added a few grams of hydrated Lalvin 71B-1122 (wine yeast) at the time of adding the mango for a few (hopeful) reasons. The major acids in mangos are found to be citric and malic acids1, of which, wine yeasts like 71B have been tested to partially metabolizing the malic acid.2 As understand this process, this malolactic fermentation or MLF in winemaking takes a tart-tasting malic acid into a softer lactic acid. In addition, MLF also can have the added benefit (if that’s what you after) of creating a “rounder, fuller mouthfeel,” which I’m almost always after.3 A byproduct of this process, however, can be diacetyl, which I was a little afraid of with the keg capped. However, once the keg reached 25 PSI, it should start venting. I should say that this isn’t a 100% fruit fermentation, so the malic acids are much lower, but I’m still curious if a secondary strain used for such a short duration can have an impact despite all the other yeast and bacteria that are still in suspension.

In addition to 71B-1122 malolactic ability, it’s also been tested to be a Beta-glucosidase producer, which is an enzyme that can enhance fruit flavors by releasing non-volatile glycosides that reside on the fruit. In fact, one study of 17 different strains found that 71B-1122 had the highest level of beta-glucosidase activity. The result of the beta-glucosidase activity in the wine tested showed a significant increase in nerol and geraniol, which likely played a part in scoring higher in aroma and flavor by a sensory panel than the control.4 Both nerol (rose, citrus) and geraniol (rose) are monoterpene alcohols that are also found in hops. Citra, for example, contains high amounts of geraniol.5

So, the addition of 71B-1122 during keg conditioning time could potentially metabolize the malic acid from the mango into a softer lactic acid while also boosting the mouthfeel. It may also result in bioflavoring by releasing glycosidically bound flavors in the mango with its high beta-glucosidase activity. At just $0.99, experimenting with 71B-1122 certainly won’t set you back much, seems like a great dry yeast strain to have on hand!

After a little over a week, the beer had already reached 25 PSI from the natural sugars added from the mango chunks. I left the beer for another 2 weeks to make sure all the activity had stopped by lowering the PSI to 23 PSI and waited a few days to see if it increased or not. With no activity on the spunding valve, I figured everything was done and put the carbonated keg into the keezer. I found out that if you fill the keg up to the top and let it ferment like this and decide to release some pressure quickly from the spunding valve, you’ll get mango beer flying out the end! Probably best to release the pressure slowly or just set it to your desired pressure and let it be.

What an improvement from the base beer! In the aroma, I get just a hint of mangos, with a light Brett funk character and a little graininess. There is still a little of that peppery quality, which for some reason at times still comes across to me as metallic.The head retention is perfect…for about 20 seconds and then falls to very thin layer. 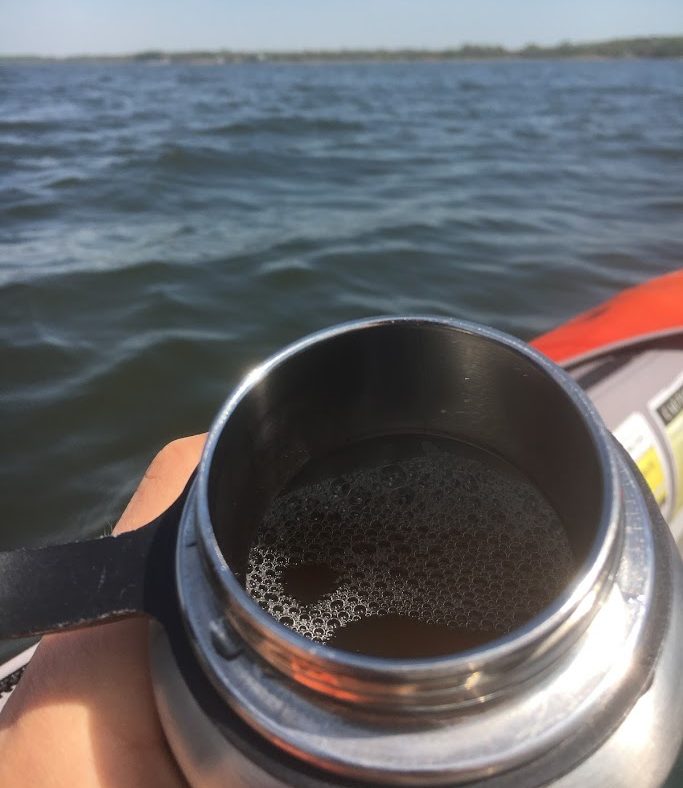 Enjoyed this beer kayaking on the Chesapeake Bay!

The mouthfeel is pretty nice, fairly rich and soft despite the final gravity of 1.002. This probably in large part because of the French Saison strain as well as potentially the 71B-1122 combined with the fruit. I wish now that I would have set some aside before the fruit addition for a side-by-side to compare the mouthfeel. It has some of that NEIPA-like creaminess that some might not like in a Saison, but I’m a sucker for in pretty much every style. The acidity is light, could use a bit more. There is a little mango in the flavor initially, but the dryness seems to cut this down quickly as well as a touch of alcohol. I think I’d add another pound or two of frozen mango chunks to boost the flavor a bit. 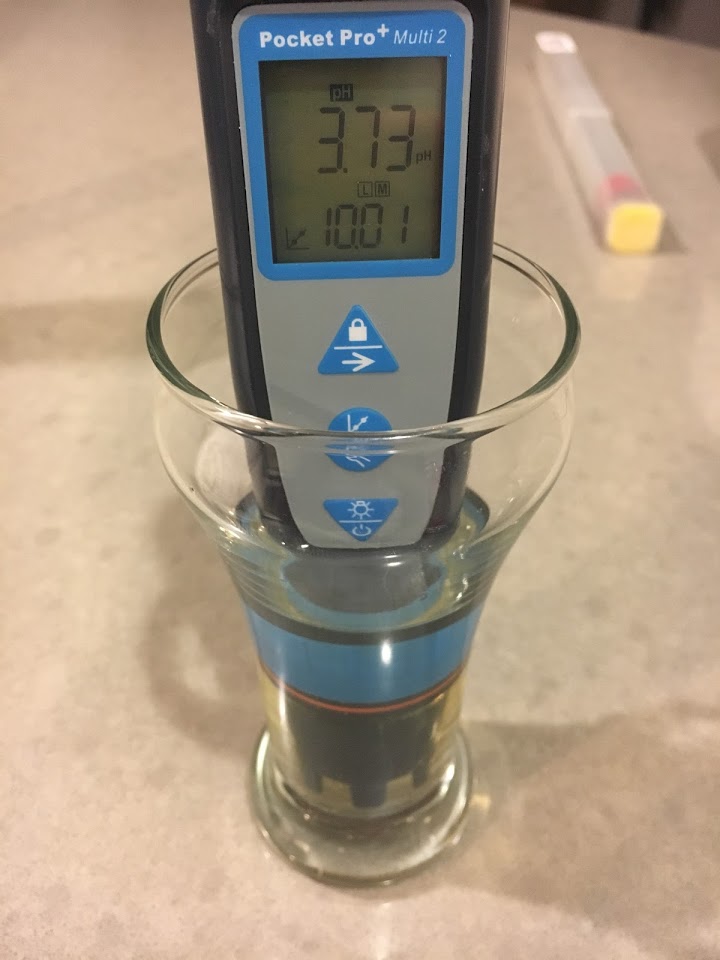 I continue to be interested in the literature on winemaking and looking for ways to incorporating some it into brewing beer, especially when fruit is involved. So although I never intended to use fruit in this beer, I’m glad it wasn’t that great initially, it got me to poke around a bit in some research and inspired a few more brewing ideas!