I went on a good stretch last year and into this year of using WLP002, a solid English strain, in almost every hop forward beer I made. I’m pretty sure I started using the strain after hearing that Firestone Walker used WLP002 in all their hoppy beers during a podcast. Since then, I have brewed 25 batches with the strain, which seems like enough of a sample size to play with the data a little to see if anything stands out. I decided to focus on the finishing gravity of all the batches and correlate different brewing processes to this figure to explore what factors were influencing the final gravity of WLP002 fermented batches the greatest/least.

I’m not trying to blow anyone’s homebrewing mind with the data (which you’ll see is fairly predictable), I just like taking a step back every once in a while and look at some figures to see if my processes are working in a way I’m intending. There were a couple interesting points I found from this exercise like:

Results – Below is a chart showing a few of the brewing processes I collected for each batch correlated to the finishing gravities. Keep in mind that a correlation coefficient of 0 means there is no relationship and anything at or below .30 would typically be considered a weak relationship and anything at or below .50 is a moderate relationship. Below this chart is a short blurb and chart of each of the brewing processes figures explained. 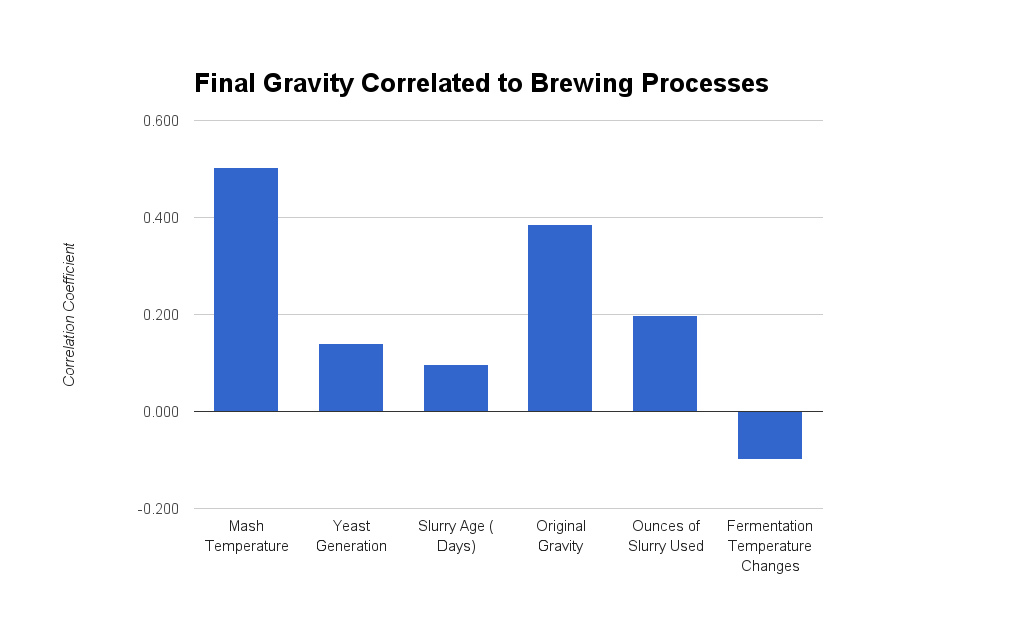 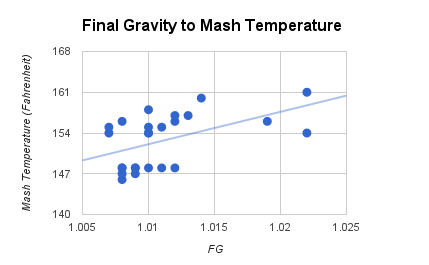 Yeast Generation – The yeast generation didn’t appear to have much of an impact on the final gravity of the batches (Correlation Coefficient = 0.140). This could suggest that harvested yeast if pitched in appropriate amounts seems to chomp up sugars at the same rate as the fresh vials did. In this case, over the 25 batches the average beer was fermented with 3.88 generation of slurry (ranging up to one batch fermented with 8th generation batch). 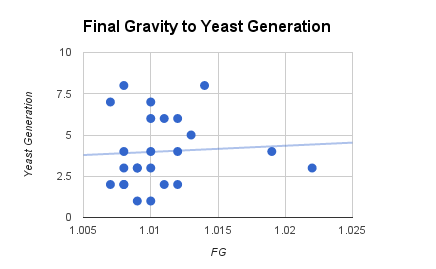 Yeast Age (Days) – The number of days the slurry sat in a mason jar unwashed in my fridge also didn’t have an impact on the final gravity of each batch (Correlation Coefficient = 0.096). As you can see from the chart, even those beers fermented with slurry over 100 days old fermented out just fine. As a side note, for 10 of the batches I didn’t even make a yeast starter prior to being pitched with the average slurry pitched without a starter at 53 days old. If anything, I can say WLP002 is a workhorse, fermenting strongly no matter how I prepped or stored it! 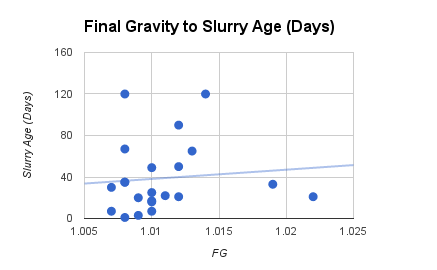 Original Gravity – The original gravity had the second highest correlation to the final gravity of each batch (Correlation Coefficient = 0.386). This isn’t likely a surprise because as the gravity increases and the workload on the yeast increases, the more sugars WLP002 left behind. The chart below shows that in my experience it if wasn’t for 3 outlying batches, this correlation number would have came down.  Of the 25 batches fermented with WLP002, the average final gravity was 1.011. 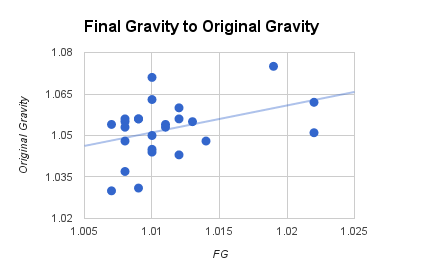 Ounces of Slurry Used – The ounces of slurry pitched into each batch had a minimal correlation (Correlation Coefficient = 0.199). I don’t actually measure each batches slurry amount, I eyeball the amount of slurry sitting in the mason jar that’s compacted below the liquid and use the markings on the mason jar as a gauge. This chart seems to tell me that as long as I’m pitching at and above 2.5 ounces of WLP002 with normal gravity beers, I’m fine (even without a starter). I should say again that I’m not washing the slurry, so the amount of actual yeast is less than the ounces I have indicated because they are mixed with trub from previous batches. I do my best to get very little trub into the fermenters after the boil because I know I will be harvesting the yeast. I typically get the cooled wort going in a good whirlpool then do a 30 min rest to let it settle. I then start emptying the wort from a side pickup discarding the first couple pints or so because this is where I see most of the trub that settled to the bottom coming out of the valve. 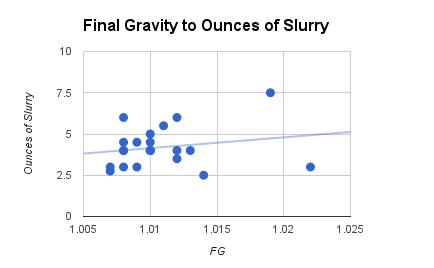 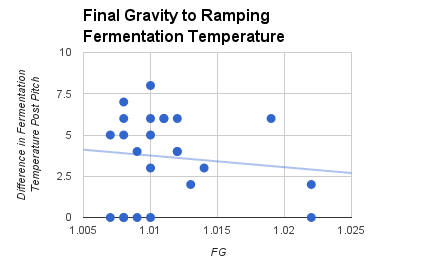